Four years and one month later, Mark Anderson of Sausalito pleads guilty to setting the fire at Wines Central, a 240,000 square foot wine storage facility that housed the cellar inventory for about 100 Napa Valley premium wineries. Anderson’s fire destroyed an estimated $100 million dollars worth of wine.

Why did he do it? Apparently to cover up for embezzling his clients out of wine he was storing for them and erase $290,000 he owed in taxes.

On November 16th, Anderson entered a guilty plea to all 19 charges in an indictment that included one count of arson, four counts of interstate transportation of fraudulently obtained property, nine counts of mail fraud, one count of use of a fictitious name, and four counts of tax evasion.

As a result of his plea bargain, Anderson expects to serve just over 15 years in prison. A sentencing hearing will be held on January 26, 2010.

Just days after the 2005 blaze, Bradley Gray took these amazing and exclusive photographs of the devastation inside wines central. At the time of these pictures, no other photographers had entered the building, as it was a crime scene. (grapelive.com) His article appeared in the Sonoma Valley Sun, which appears below: 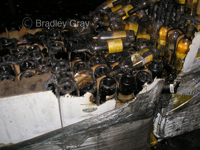 The eight alarm fire that ripped through a Vallejo wine storage facility made headlines last week, as over $100 million dollars worth of wine went up in smoke.

Now, a couple of weeks later, details are emerging and the scenario is getting pretty kinky.

The facility that burned was a company called Wines Central.  They stored wine for about 80 wineries and 40 collectors, and the company was housed in a former military building on Mare Island. 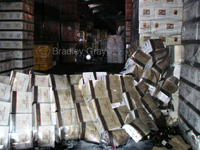 The building was a virtual fortress, with three-foot thick cement walls and heavy-duty steel doors.  The Navy used the building to store atomic bomb parts and torpedoes over 50 years ago.

In other words, this place wasn’t a fire hazard. Wines Central’s website boasts “state of the art security, fire and temperature monitoring systems.”

Because of the building’s immense stature, fire officials had difficulty gaining access to the blaze. Vallejo FD arrived on the scene minutes after the fire started, but by the time firemen cut through the heavy-duty steel door, the fire had grown to a point where it was too hot to enter.

Wines Central is owned by several partners, who have been fighting internal legal battles (ownership disputes) for a number of years.

Recently, Wines Central petitioned the court to allow investors to get involved, but the court denied the motion because of these internal legal problems. The company has reportedly been taking huge financial losses for some time. 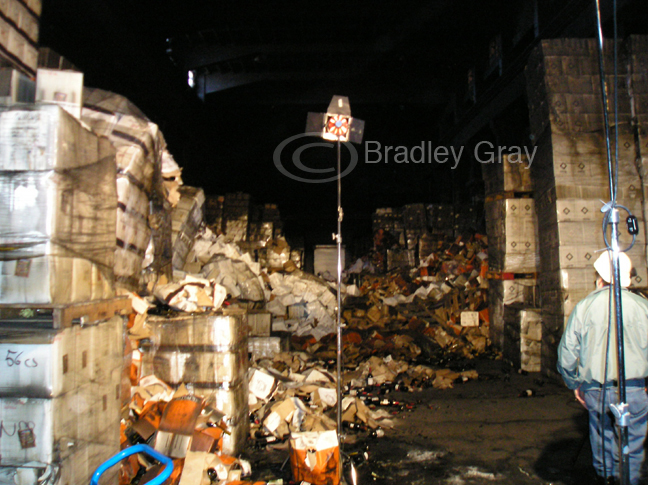 One of Wines Central’s customers was Mark Anderson of Sausalito Cellars.  Anderson’s company stored rare wines for collectors.  Anderson is a City Parks and Recreation commissioner for Marin.

And who would have guessed it? Anderson is currently being charged with 10 counts of embezzlement.  It seems that when Anderson’s customers came looking to retrieve their rare wines, they couldn’t be found.

From what I understand, Wines Central gave Anderson the boot, and told him to clear out his client’s wine.  So, Wines Central general manager Debbie Polverino allowed Anderson access to his wine the day of the fire. 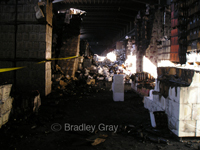 So, there was Anderson, on the scene, minutes before the blaze erupted.  Two forklift operators employed by Wines Central were also on the property.

And now, authorities have announced that the cause of the $100 million dollar blaze was–you guessed it–ARSON!

I visited the fire scene last week, and found nearly a dozen panic-stricken vintners standing in the parking lot awaiting word on the fate of their wines.  Additionally, ATF officials, attorneys, insurance adjusters and independent fire investigators were on the scene.

From the outside, the building showed hardly any evidence of fire.

Wines Central allowed me to tour the inside of the building, along with some fire investigators.  I signed the waivers, donned my hardhat and went in.

As soon as I entered the fire scene, my jaw hit the ground.  What I witnessed was a wine holocaust of epic proportions.  Destroyed wines in all directions, as far as the eye could see.  Everything was black, and the fire stench was haunting.  Broken glass still rained from windows above, and melted and broken bottles were strewn everywhere.

I spent about an hour inside the building, and was surprised that I was allowed free access to roam through the wreckage.  One thing I was looking for was wine from Sonoma Valley, of which I found none.  I know there must have been some, though, because of the size of the facility.

Some of the more eye-popping sights were cases of Screamin’ Eagle, where the glass had melted but the labels were still in tact, magnums of Signorello Padrone (meirtage) that were charred beyond recognition, palettes stacked 15 high of rare “reserve” wines that had toppled and burned.

Fire and ATF authorities are being quiet about information gathered to date, but the Sonoma Sun was able to confirm that the fire was started with chemical accelerants, and that Anderson is the primary suspect.

“They found of box of rags in his (Anderson’s) space,” said Polverino.  “There was definitely something on them, but it could have been WD40 for all I know.”

It is unconfirmed whether the rags were used to start the blaze.

I asked Polverino when there might be further announcements.

“We probably won’t say anything until we have Anderson in handcuffs,” she told the Sun.

Authorities have searched Anderson’s house and vehicle in Marin, but aren’t sharing what they found.

Some of the rare wines that were destroyed cannot be easily replaced. 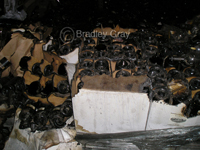 “We had our whole library there,” commented a dejected David Graves, co-founder of Saintsbury Winery in Carneros.  “This is our 25th vintage, and we were planning on hosting some amazing tastings, a lot from large-format bottles.  But now it’s not to happen.  The fact that they’ve determined that the cause was arson is really hard to accept.  Someone’s twisted idea of doing something like this for personal gain is really very upsetting.”

Many Wines Central clients were not insured.

I’m not insured,” said Jeff Tamayo of Cana Vineyards.  “Why would I need insurance in a building like this? I have no idea why somebody would do something like this.”  Tamayo fears that he has lost the 5,300 cases of wine he had stored in the facility.

“It was our whole life,” commented Joy Caldwell of Caldwell Napa.  Her father, winery founder Jack Caldwell, was beyond words.

“They were all in there.  Everything from 1998 on.  Our ’03 was in there, and it hasn’t been released yet.”  Caldwell was unsure of his insurance position.

Wine doesn’t have to be burnt to affect quality. Even moderate amounts of heat are enough to destroy wines.

Jack Krystal, chief partner in Wines Central, told the Sonoma Sun that he felt that some of the wines could be salvaged.

“We’re just trying to do what we can. Right now we don’t know for sure, but it looks like some of the wine is still OK. “ 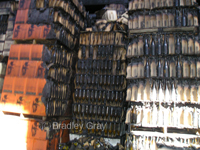 The impact of this fire will reverberate through the wine industry for years.  In some cases, wineries lost several years of production.  Sure, the insurance companies might pay off, but they will lose years of brand building and momentum.  These wineries will lose their spots on restaurant wine lists and in distributor’s books.  A loss of this size is potentially devastating to a brand.

Wineries who were known to have stored wines at Wines Central could be potentially blacklisted for a long time, as retailers might not want to speculate on whether or not wine was compromised in the fire.

The good news is that no one was seriously hurt.  One firefighter was hospitalized for heat exhaustion.

To see bigger images of the fire 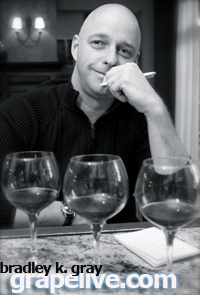 Bradley Gray is a Sonoma, CA based wine journalist. His work has appeared in The Sonoma Index Tribune, Sonoma Magazine, The Sonoma Valley Sun, Wine Spectator, Marin Scope Newspapers, FineLife Magazine, Appellation America, Grapelive.com, Grapevine Magazine and others. He can be reached at Bradley@vom.com