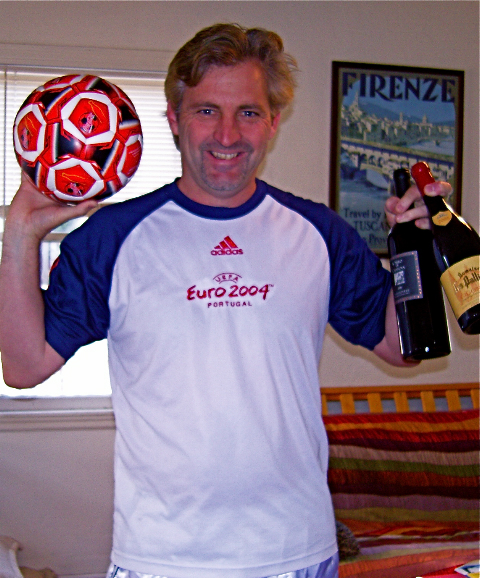 Every four years the top European soccer (Football) teams play the mini World Cup and these sixteen countries due battle for the trophy as the best national side. This is war, be in no doubt about it, but it s also a big party and a great time to show your pride. Being half English, I have to pick another team to follow, as England didn’t make it into the last groups. That was not a dose of national pride, but I’m getting into it just the same. Even though my friends in Sweden and Russian might get a little mad at me, I picked Italy to win it all, and until yesterday I was feeling really good about their chances. This came to a blunt halt with a 3-0 thrashing at the hands of the Dutch. So I think I’ll play out my own Euro with wine now! Lots of wine. France didn’t do so well in their first match either only managing a tie with Romania. But, I played out an Italy vs. France wine match, with La Spinetta’s Tuscan Red Sezzana against F. Magnien’s Nuits-Saint-Georges Red Burgundy. Remarkably the wines played just like their national soccer sides in many ways, though much better! The La Spinetta Sezzana has power, flair and a strong defense and the F. Magnien Burgundy has overlapping layers and puts on a real beautiful show with energy and focus. In the end my nod goes to Italy even though it was like winning on penalty kicks, it was that close.

Then there is Spain and Portugal… I can’t wait!

.
*A correction mention. I put the 2006 Martin Alfaro Pinot Noir Garys’ Vineyard as my Wine of the Month for May, and I gave all the credit to Richard Alfaro, and that was a big mistake. Joe Martin, Richard’s partner was the winemaker and I would like to put that right. Joe, I’m sorry for my slight, you have made an awesome wine and deserve the kudos! Please check out all the great wines made by Joe Martin and Richard Alfaro at their website MARTIN ALFARO WINERY, besides their amazing Garys’ Pinot they have just released one of my other favorites, the 2006 Martin Alfaro Pinot Noir “Schultze Family Vineyards” Santa Cruz Mountains, which is one of the best deals in Pinot Noir out there!