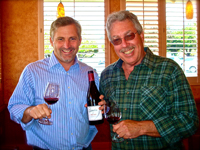 This has been an impressive month in terms of new releases and the quality of the recent wines and vintages. I must say I have been blessed to have been at the right place at the right time to taste such treats. Winemakers have been out in force to show their latest offerings and seeing for themselves what the market is really like, and though things are still really scary there has been a slight up-tick in customer spending, though this seems to be, because of the deals that seem to be popping up everywhere and big discounts. The exception would seem to be limited production Pinot Noir, where the new releases are doing extremely well, especially since the 2007 vintage is one of the best so far in the 2000’s. Terry Bering of Castalia, came through the central coast showing his amazing 2007 Pinot Noir “Rochioli Vineyard”, which is mostly from the famed River Block site at Rochioli and I can say, it was just stunning. Terry is the cellar master at Rochioli and makes about 300 cases a vintage of his own Pinot Noir and is one of the great secret finds in Pinot, and at $50 a bottle, a real deal compared to his employers River Block 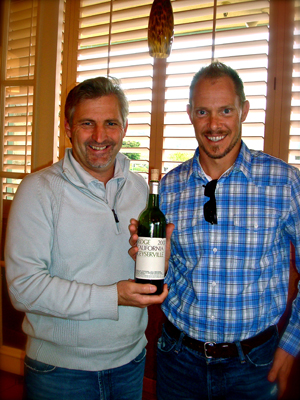 or Williams-Seylem, which often go for twice that price, at least!

Quickly, I can tell you about the new releases from Ridge Vineyards, shown to us by their long time Monte Bello winemaker, Eric Baugher, and I can tell you these wines are all world class, click on my reviews page link to see my notes on them. The new 2007 Ridge Chardonnay is a showstopper and I loved the new Geyserville vintage as well.

Keep your eyes open for a new top Napa Cabernet, coming to you from the former winemaker at Chateau 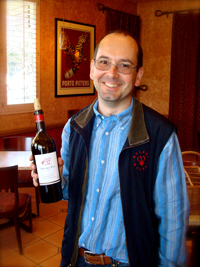 Latour, Denis Malbec and his wife May-Britt who are releasing their beautiful 2005 Norte Vin Howell Mountain. Denis also makes the Kapcsandy line up, taking over that job from Helen Turley with the 2005 vintage and scoring 95-97 Points from Robert Parker on those efforts. With his own label, Denis has made unique Bordeaux inspired mountain Cabernet that offers depth, elegance and complexity with ripe and powerful fruit. Though this wine is very expensive at $150 each, it is a sublime wine, and it would be hard to find Bordeaux that could be this good at this price.

This might be the time to think about Syrah, for those looking for full bodied powerful wines with tannins and complexity, but don’t want to for top Cabernet Sauvignon maybe it is time to jump into the purple goodness of Syrah. I just went to Big Basin’s new release party and tried Bradley Brown’s latest wines, including his estate Syrah, the Rattlesnake Rock. It is time…. Finally for Syrah to move up in the public’s eye. 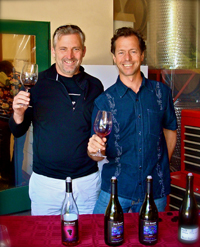 The 2006 Big Basin Syrah Rattlesnake Rock is a rich and intense wine that offers ripe flavors, spice, power and a long finish, a wonderful wine that deserves lots of attention. They also showed the 2004 version, and wow, no wonder Bradley has won so many fans, medals and acclaim from the wine press, including 90 plus ratings from Robert Parker and others, including me!

Sometimes, with so many choices, I find it hard to pick a bottle to drink with friends, and the other night I agonized over my choices and sat in front of my collection looking for a perfect wine to introduce to a friend. I can tell you that I must have picked at every bottle on the rack. Then it happened, I came across an overlooked bottle that I hadn’t remembered having, but one that proved a perfect match for the evening, and it got me thinking, “Why don’t I drink more of this?” Well, that wine was a Chateauneuf-du-Pape Red, these are world-class wines that still are fairly priced for the quality and give lots of pleasure.

The bottle I had was a sexy and deep wine that impressed me more with each sip and each glass, until sadly it was gone. With plum, cherry liqueur, blackberry, earth, spices, mocha and grenadine notes the 2005 Roger

I also am thankful to have been lucky enough to have been able to try to amazing Champagnes, it is not often when people share vintage Dom Perignon, Billecart-Salmon or Crystal, so it is a special day when you are invited to try them all in one setting. Being a wine professional, sometimes I try to not like expensive labels, but I can tell you the 1996 Dom Perignon

Moet & Chandon Champagne is a beautiful and deeply complex wine; yes it is very lovely bubbly.

I was very impressed with this vintage and it put the others in the shade, even though I was surprised how nice the 2000 Crystal Roederer Champagne was. The poor Billecart just never had a chance, even though it is a super Champagne. The Dom showed rich yeasty flavors with a touch of savory earth, pear and lemon zest, leaving a long spiced apple finish and lingering toast. The Crystal was lighter with mostly citrus fruit and bright flavors; this wine is young and firm, finishing crisp and sharp. Both Champagnes showed perfect bubbles and had creamy mouth feel, with the Dom getting nod as the winner, and rated a near perfect score in my notes. 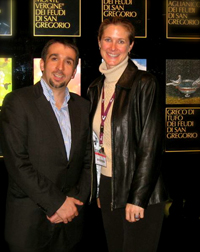 Last month I told you about Brandy Falconer, and she has been posting some interesting stories here on Grapelive for the last few weeks. She went to Italy to cover the huge wine tasting event in Verona, the Vinitaly. I have been jealous of her travels and amazed with all she has done in such a short time. Brandy lived in Italy, near Naples for almost two years and has many friends, but Vinitaly was just a start, as she is also challenging herself and exploring the Italian wine industry to find her next stage, maybe even finding a new career there. I admire her spirit and guts to pack a bag and go, as she plans to stay until her visa runs out visiting as many wineries and vineyards as she can fit in and discover her future. I want to say good luck to her on her journey and thanks for posting her adventures while there. To see her full coverage of Vinitaly 2009 and read her latest posts keep checking in here at Grapelive. I don’t know about you, but I can’t wait to hear about the great wine and food of Italy and hear about the people and vineyards she sees and meets on her three-month trek.