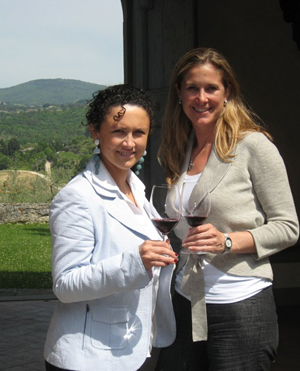 After such a fun visit to the Marchesi de Frescobaldi camp at Vinitaly, I was really looking forward to seeing two of their estates on my trip through Tuscany.  Agnese, assistant to Tiziana Frescobaldi, the director of Communications, had suggested that we visit Castello Nipozzano and Pomino Estate which are just East of Florence along the Arno and Sieve rivers.  After a major blunder on my part in navigation, I arrived later than expected, but to a friendly and inviting welcome from Agnese and Gianluca who immediately drove us from Nipozzano, to Pomino Estate, just 10 minutes away.

In those few minutes, we went from a typical Tuscan countryside of manicured rolling hills with vines and 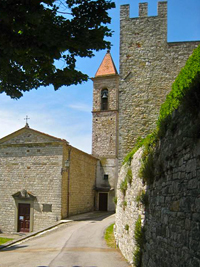 olive trees to what I would consider another kind of paradise: pine and cyprus-covered hills, more like mountains, a view of the valley below and a fresh cool breeze.  The sights, sounds and scents of Pomino brought back many happy memories of places like Carmel Valley, and Yosemite.  The vineyards here are small, and fit in like puzzle pieces with the groves of chestnut and pine trees on the hillsides.  At elevations ranging between 1,000 and 2,300 feet, and with cooler evening temperatures, Chardonnay, Pinot Grigio and other white varietals do well here, not to mention the Pinot Noir, which is expressed exceptionally well in Pomino’s Casafonte vineyard.

Since the 19th century, Pomino has also been producing Vin Santo, a delicious and wonderfully Tuscan after-dinner favorite not to be overlooked or more importantly not to be simply grouped with sweet dessert wine.  Made from Chardonnay, Trebbiano and a little bit of Sangiovese, Vin Santo is usually enjoyed with small biscotti after dinner, but can also be enjoyed as an aperitif with foie gras, which I am excited to try.  We were upstairs in the Vin Santo aging room where the 2005 vintage is still quietly maturing in barrels when I proudly showed Agnese and Gianluca a photo of my friends’ bottles of Frescobaldi Pomino Vin Santo from 1975 and 1971.  Every time I go to Lucca, I drop hints that we should see if that vin santo is still good after all these years, but I haven’t gotten a response yet, I wonder why.. 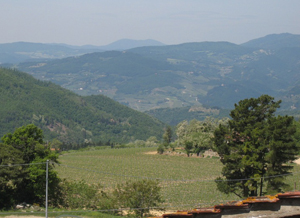 When we returned downstairs and outside, I was marveling at how the breeze was making such beautiful music through the pine trees, and had a huge smile on my face.  After an unnecessarily tedious drive (note to self, hire a navigator!) I finally felt peaceful and relaxed.

We drove back down the hill to Castello Nipozzano where the tranquility just takes on another form.  The Tuscan scenery of hills and olive groves and vines and this perfect old castle-fortress dating back to the 11th century is everything you want Tuscany to be.  And it is quiet, beautifully quiet.  We started our tour in a room with old equipment used for winemaking and bottling, and I was amazed to see a reproduction of a decree from 1716 describing the different zones of denomination for the region’s wines, like Pomino.   The anthropology major in me wondered how anyone could not be enticed to drink these wines with such abundant and tangible history?   We headed down into the cellars to see both the family’s and the historical collections.  I learned that when there is a new addition to the Frescobaldi family, a number of bottles of Nipozzano Chianti (in the hundreds) are set aside for them  as a birthday present and a simple wooden plaque is hung with their name and birth date stenciled on it.  Stacks of dusty, unlabeled bottles lined the walls and then I saw the most recent stash of perfectly clean 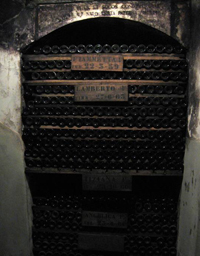 bottles that had just been placed there in October.  The Frescobaldi name is still flourishing, and in contrast, another cellar behind iron gates with beautifully colored walls holds the family’s historical collection, many bottles of which are survivors of a German attack in 1944.  Stacks of bottles with the same wooden signs show the years 1864, 1908, 1911 and on up, the number of bottles increasing with the years.  When I comment on the colorful walls inside, I am told that the colors change with the seasons, due to the fact that what covers the walls is not paint, but cellar mold!  Who knew mold could be so quaint and charming? 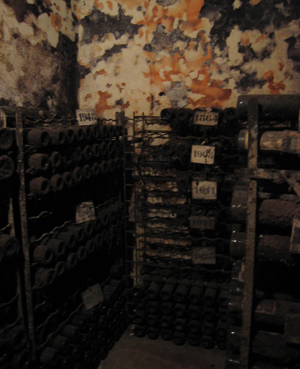 Gianluca left us to meet another group, and Agnese and I walked into the residence to go through some of the rooms.  Not simply a museum or showroom of Frescobaldi history, this is where the family entertains and enjoys the fruits of their labor.  There are photos of Britain’s royal family, American movie stars and more enjoying the grounds and the wine.  The home is relaxed and elegant, well-appointed and comfortable at the same time.  A new addition to the facility is a multimedia presentation room with an adjoining kitchen and prep area for conferences and presentations.  As we reached the small courtyard off of one of the living rooms, I noticed a table beautifully set for two out in the fresh air.  It was lunchtime and this was our table, dining al fresco at Castello Nipozzano!  The first plate was an assortment of Salumi which we enjoyed with the Pomino Bianco, the perfect glass of wine for this sunny, warm day.  Next came the “chitarra” spaghetti accompanied by the Nipozzano Chianti which we enjoyed over our conversation about Los Angeles and California, and other places Agnese has visited in the States.  This is how Italian lunch should be: equal amounts of great wine, delicious food and fun conversation. We had the bases covered with an extra helping of beautiful weather.  The next course was thick slices of perfectly cooked beef tenderloin and the Castelgiocondo Brunello.  It was nice to experience Brunello like this, mid-day, outside with lunch.  Something I have never done, and something I had never even considered.  With newly opened eyes, the boundaries of wine had just expanded for me.  After dessert and coffee, we walked through the house to the kitchen to thank Chef Leah.  As if I needed more reason to be impressed by this place, I saw 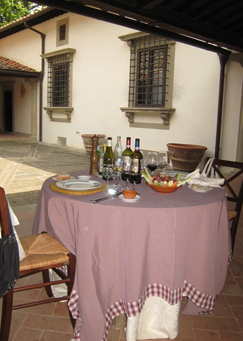 hanging on the wall with other menus and letters, a photo of Charles and Camilla and a letter thanking the Frescobaldi family for their wedding gift of selections from their cellar.

It was hard to remember that this was a working day in such a serene setting, but it was time to head back west to Lucca for the night.  I wasn’t the only visitor at Nipozzano that day, and there would be plenty more journalists and enthusiasts coming in the following days to learn about the history and winemaking of the Frescobaldi family.  I personally look forward to exploring their Castelgiocondo Estate in Montalcino the next time I am in Tuscany.  The next time you are in the mood for a Tuscan experience, forget the “chick flicks” and head to your local wine shop.  You can experience all the romance and beauty of this region on your own terms by enjoying a bottle from Frescobaldi.  For you Californians and Californians-at-heart out there, I suggest a Castelgiocondo Brunello di Montalcino paired with a generous slice of Humboldt Fog cheese.  Enjoy!