Day 2 at Vinitaly – The Day of Good Fortune

My four-leaf clover brought me all kinds of luck today, that or the stars were aligned for this normally stressed and stubborn Aries.  Maybe it was because, instead of rushing to the expo, in the rain, straight from the house, by bus, I decided to have a proper Italian breakfast at a bar with my host, Piero.  The sun was out which meant that I got to ride on the scooter, and also meant a nice warm brioche and fabulous cappuccino.  We stood at the counter of course, as the bar is not really a place to dilly-dally, and even though the process of ordering, eating and paying only took 5 minutes, it was truly a break.  Two minutes later I was wishing I had a “helmet cam” for the drive to the expo.  We dodged in and out of stopped traffic, and as we came within centimetres of the other vehicles, all I could think of was “keep your arms and feet securely inside during the ride.” This may not have been as fast and furious as Space Mountain, but it was just as intense.

I headed to the VIP lounge to do some writing and check email, then noticed in the day’s program that there was an organized group tasting and lecture on Umbria’s gem, Sagrantino, kind of a forgotten favorite of mine since it is hard to find in the states.  I quickly finished up and headed to the lecture rooms and when I arrived, heard the receptionist telling another guest that the tasting was full.  When I approached, she suggested that I wait to see if there were any no-shows, and I did.  A few minutes later, I was asked for my card, and about Grapelive, and then was given entrance to the tasting!  A stroke of luck, because at the tasting I learned much more about the area, the characteristics of the wine, and tasting in general.  I sat with six glasses in front of me arranged on a paper mat, a full bottle of water (yeah!) and a little opaque plastic spitting cup.  There was also a beautiful folder full descriptions of each wine and notepaper and a brochure of the consortium for Sagrantino.  A panel of three gentlemen talked us through each wine, and though it was in Italian, it was understandable and enjoyable.

Afterward, I found a quiet spot and called my friends Mike and Mary Grulli of Vinottimo, who represent fine wines to the stores at overseas military bases.  I met Mike about eight years ago when I lived in Naples, and immediately learned to trust his every suggestion.  He guided me and many enthusiasts through the regions of Italy via their wine, and I was fortunate enough on a couple of occasions to have bottles signed by the winemakers because of special appearances that he had set up.  Luckily, I caught them at just the right time before a busy afternoon, and we met up at Tommasi where I was re-introduced to the owner, jovial Franco whom I remembered from a spectacular wine dinner he presented in Naples years ago.

Determined to stay on course with appointments, we all rushed off, and I headed to Marchesi de Frescobaldi, whose estates include Pomino, Nipozzano and Castelgiocondo, and whose collaboration with Mondavi created the Luce and Lucente wines.  Mike had warned me not to get my hopes up of meeting one of the family members, and when I approached the two-story stand, which was larger than my last apartment, I could see crowds trying to get past the velvet ropes.  When I gave the receptionist my card, I caught the eye of a beautiful young woman with olive skin, green eyes and fabulously curly black hair, and it turned out that she was my contact.  Agnese had seen my photo on Grapelive and recognized me, and within seconds I was behind the velvet rope.

”Where are the flashbulbs?” I thought as I looked back at the eager crowd, looking for paparazzi.  As we headed upstairs, Agnese stopped suddenly and introduced me to Tiziana Frescobaldi!  What an honor this was for me, and another example of my good luck gone wild.  We found a table on the open deck upstairs and began tasting from the Pomino estate: Pomino Bianco (Chardonnay and Pinot Bianco), Pomino Benefizio (a Chardonnay Cru), and the Pomino Rosso (Pomino Nero and Sangiovese), which was my favorite.  While writing my notes, I wrote that I simply wanted to keep drinking this wine.  There were fresh aromas of cherry and fruit and a ruby color that continued all the way to the edges.  It was dry and tannic, but still allowed the fruity raspberry flavor to emerge, and then finish with a slight bitterness, which I liked. 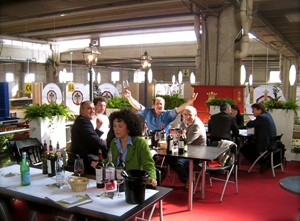 On to Nipozzano estate and its namesake wine, a 2006 Chianti Rufina Riserva, then Montesodi, a 100% Sangiovese Chianti Rufina Riserva, and finally the Mormoreto, a “Super Tuscan” Bordeaux-style wine, and one I remembered bringing home from Italy and enjoying with a special occasion dinner a few years ago in Hawaii.  I think the occasion was the Kona earthquake, and since there was no power, we decided to not chance the Mormoreto going bad in the wine ‘fridge.  Uh huh.  This was my favorite of these three, with its enticing dark purple rather than ruby color, and the aroma of spices, particularly clove and red berries.  In the mouth, this wine goes through phases, the tannins, then a balance of acidity, then the full-bodied feel and then a long finish of spice.  This is a wine to drink and enjoy, and every sip will reveal something new.  Pulling away from the focus of these impressive wines, I noticed the other groups tasting and how they were talking and enjoying themselves thoroughly, like it was Saturday afternoon by the sea, not a frantic convention.  At this point, Tiziana joined us and we talked about my future visit to their estates.  I was told that this was just a preview of what I would experience there, and I cannot wait.  Worth noting is their Saltagrilli Rosato, a rosé from a blend of Sangiovese, Merlot, Cabernet Sauvignon aged in stainless steel then six months in the bottle.  This is a very drinkable wine, with strawberry flavours, fresh taste and a simple finish, perfect for summer. 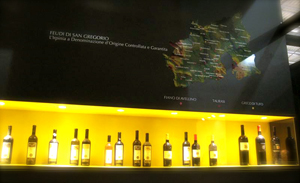 I fought the urge to return to the sanctuary of the lounge and headed to Feudi di San Gregorio, a winery that I knew well in Naples, and that I have watched grow over the last eight years.  Alessandro welcomed me inside their stylish booth done in black and yellow, and again I could have been in any little bistro in the world.  My favorite wines in Naples and the Campania region in general are Greco di Tufo and Taurasi, and this winery excels at both.  This winery is excited about expressing the terroir of their region and the indigenous grapes.  To do this, they employ a winemaker who spent years as a local farmer in Campania, someone who knows the land, the climate and the plants that grow here.  This is a particular source of pride for them, Alessandro tells me.  After tasting their three new sparkling wines, then the entry-level Falanghina, Fiano di Avellino and Greco di Tufo, we moved on to their more refined cousins, two of which have been designated DOCG in recent years.  The Serrocielo Falanghina DOC had aromas of apple and caramel, and intense complex flavours that sat full and round in the mouth.  The Pietracalda Fiano di Avellino DOCG showed off this grape’s heavy perfumed aroma that reminded me of Hawaii’s tropical fruits.  The taste was round with some nice acidity and ripe guava flavours.  The award-winning Cutizzi Greco di Tufo DOCG had mellow aromas of minerals and fresh cut grass, and the taste was like chewing on a piece of mild lemongrass on a sunny day.  This is a fantastic wine with fish and a signature dish of the region, linguine with clams. 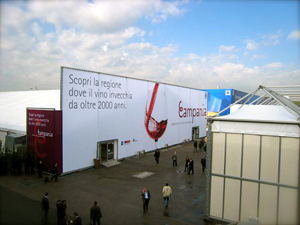 Moving on to the reds, this tasting train was only gaining momentum.  We tasted the four Aglianico reds chromatically, something I had not yet done.  The 2007 Rubrato IGT was first, with its cherry, mushroom and spice aromas, ripe cherry, tobacco flavours and tannic finish.  Second was the 2005 Taurasi DOCG which had a nice velvety feel and the signature chocolate aromas and graphite on the tongue at the finish.  The 2002 Piano di Monte Vergine Taurasi Riserva DOCG was full of pepper, vanilla and smoke aromas and a cherry jam flavor with a tobacco finish, all in a velvety package.   I enjoyed the butterscotch and fresh tobacco aromas of the 2005 Serpico Irpinia Aglianico IGT, which was a very chewy wine with intense fruit and toasted almond flavors.  It was a treat to get to taste the 2005 Patrimo Merlot IGT, a dark, inky ruby color with its coffee and berry jam aromas and long fruit and spice finish.  At this point, a nice piece of Neapolitan pastiera, a traditional Easter pie reminiscent of cookie dough was offered to me, perhaps because my eyes had glazed over by this point…but what would go better with pastiera than the Privilegio Fiano dessert wine?  I don’t know, but I’m thinking water at this point.  However, this dessert wine surprised me with its refreshing acidity and intense, fresh flavors due to the grapes being shriveled inside the winery and not in the sun.  It complements the flavorful and (not too sweet) pastiera beautifully.