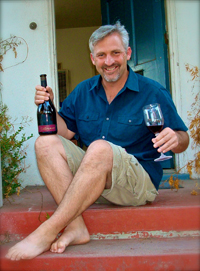 Paso Robles has a diverse and interesting mix of wines and terroirs, and after an in depth tour recently I was left very impressed with the regions passion, quality and potential. These people have a sense of common cause and unity that them together and sets them apart from other regions and this sense of purpose, even in this economic down turn is admirable, instead of fighting each other for every dollar they are sticking it out together and preparing for the future which they believe is brighter when looking ahead. From the outside looking in the market notes Paso Robles as a fine producer of ripe and easy Cabernet and Zins, as well as the hot region for Rhone style specialties, but Paso winemakers don’t want to be pigeon holed, they believe they compete for interest and quality on all levels from value priced table wines to the super high priced limited production boutique segment, plus they want to be free to explore new ideas and types of wines from their many micro-climates. Paso has many distinct soils and differing climates very close together, maybe because it a place where the tectonic plates crashed into each other and cool breezes have found small gaps in the Santa Lucia coastal range. These things change the character of the wines dramatically even from within the same vineyard. There is a friendly rivalry between the hotter eastside and the more severe degree changes that is found on the fashionable westside. While interesting wines are produced from both sides, I must admit I find the small estates on the westside the more deep and complex of the two. The soil is loamy on the eastside and ancient seabed, almost limestone like on the west, though there is some granite also mixed around the region as well, all which adds its own stamp on the wine too. 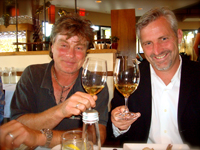 Reality check, while Paso has had some good success, like J.Lohr’s Cabernet Sauvignon becoming the best selling wine in North America in its category by volume and cult hero Tobin James having about 20,000 wine club members! There are uncertainties and problems still, and after tasting thousands of wines I personally am not convinced Cabernet Sauvignon is the way forward for Paso, and even Zinfandel looks shaky to me in some regard. Paso is trying to undo the stigma of being not Napa Valley, like every other region in California, and the desire to be lifted out of Napa shadow or stop being the ugly stepsister, and its efforts so far have been mixed. That said, I did get a chance to try a 1977 Estrella River Cabernet Sauvignon made by Gary Eberle and it was still youthful and rich in flavor and color, a complete marvel and revelation. While I am happy for Steve Lohr and his families achievement in Cabernet Sauvignon sales, I am not convinced that for quality and price Paso is the region to be for Cabernet, though there are exceptions of course, one being Stephan Asseo’s L’Aventure which does compete with any wine from anywhere, no question. And, while Paso has many fanatics for its Zinfandel, it 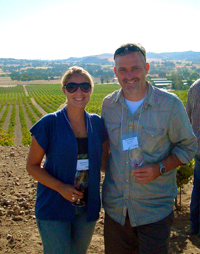 would be hard to say in my mind, that Paso is the best region for the grape for my personal tastes. Still, there are people that brave the heat of summer and miles of dusty highway to stock up on Tobin James, Peachy Canyon and be part of their “gang”. But, I do admit there is a new wave of Zins coming from Paso that will change the way people and critics view Paso and I am a fan of this new group and wish them all the success in the world, people like Four Vines, Lone Madrone (Neil Collins, winemaker from Tablas Creek) and Janell Dusi (J Dusi Wines), third generation winegrower, as these may lead a new Zin revolution here. Also, even Turley Cellars is enjoying the Zinfandel revival with his Paso Robles old vine Zins plus an estate Grenache and Rhone White blend.

The most successful side of Paso Robles to be me has to be the Rhone style wines and unique regional blends where you see the marriage of Rhone, Bordeaux and Zinfandel grapes and others, these to me are the future and the most interesting wines that I have tasted from Paso Robles. Though Gary Eberle and John Alban (in neighboring Edna Valley) made Paso a household name as part of the Rhone Rangers with stylish Viognier and deeply flavored Syrah, it might have been Tablas Creek that brought home the point when the Haas and Chateauneuf-du-Pape legend Chateau du Beaucastel family, the Perrin’s came to Paso in the mid nineties. Tablas Creek 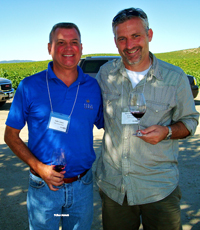 focused on vines and terroir and made a huge gamble on the region, and a noble investment that has helped the region in many ways. The Tablas vines have become the stuff of legend and have been the cuttings of choice for lots of new winegrowers in the region and beyond. Tablas Creek wanted a place to plant Mourvedre especially, like their Chateauneuf, and Roussanne for their white grape, and Paso Robles has been a great host for these varieties. Tablas remains an explorer and continues to try new grapes and refining their blends their commitment to Paso has never waivered, and they have become part of the family heritage there. Plus the up and comers like Booker, Denner, Saxum all making an impact with amazingly deep and seductive wines from Rhone grapes, mostly Syrah, but with Grenache, Mourvedre playing important roles as well. There is some Zinfandel crossover with the Rhone styles with Linne Calodo and Four Wines making Rhone plus Zin blends with super results. There is also a push in Rhone style whites mixed results, though most people are finding lots to love in certain grapes and blends with Roussanne and Grenache Blanc leading the way, though some of the Viognier is good too, but might be better as a minor player. 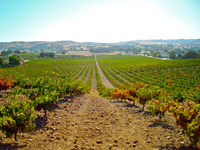 Paso’s history in winemaking and grape growing goes back to the California mission era and after that many pioneers continued to plant grapes in the region through out the centuries, both 1800’s and 1900’s, but the most successful period has been since the end of the second world war, including the Dusi vineyard plantings that started in 1945 and the dynasty that Dante and Benito build and that Mike and daughter continue today. In fact now for the first time there is a family label, J Dusi Wines that had their premier release with the 2006 vintage. The Dusi Ranch has the feel of the southern Rhone, almost like Chateauneuf-du-Pape with rocky vineyards and “old sisters”, head pruned vines, mostly Zinfandel of course, but there is some other things hidden here too, like some old Carignane that they are looking to bottle on its own at some point. Family history and culture are a big part of what makes Paso Robles such a welcoming region to visit, and almost every winery has family roots and are warm and are sincerely friendly in almost a Midwestern or Southern sort of way with a humble charm that is refreshing. This makes Paso Robles an easy place for new wine drinkers to visit and get an initial taste for many different wines from light and fruity, sweet and serious styles. Young and old are treated very well here and it is a true bargain area to visit that has lots to offer the day traveler and the multi-day visitor with hundreds of wineries and a wonderful selection of reasonable hotels, I stayed at La Bellasera and was very impressed at the service and comforts for the price. 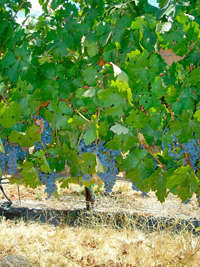 Paso Robles has a vast array of restaurants offering everything from sushi, old school country cooking to cutting edge culinary magic all though are easy to enjoy and casual laid back places with excellent service. I will give huge nod to Artisan, an awesome foodie experience with a local slant to farms and wines, all exceptional quality, a place I will return to many times! Then there is Villa Creek, another place that highlights the local scene and also has a winery, sort of like the Hitching Post, with better food and wine… The whole region is waiting out the economic crisis with hope, enthusiastic passion and undoubted talent. The future is in their hands, and while there are some painful times ahead they are as a region only just scratching the surface of what they can do and achieve. and it is an exciting time for the winemakers and wine lovers alike. The whole community is buzzing here and the togetherness is heartwarming to see, the loyalty, values and earnest nature are very much in the air here in Paso. I want to thank all the wineries and vintners, plus the Paso Robles Wine Association for the candid discussions and their remarkable hospitality that they and the whole wine community showed me over my visit to the area. It was a real pleasure to finally give Paso the attention it surely deserves, again I give thanks to all those that helped make this trip special, way to many people to mention, but to all I owe a great thanks.