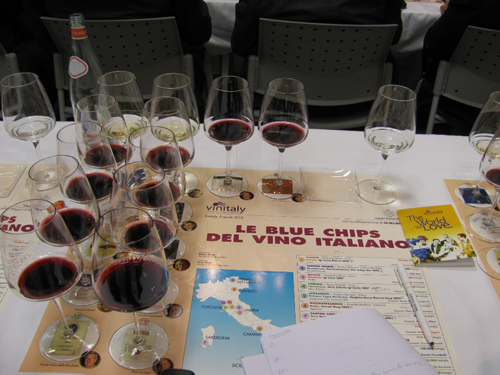 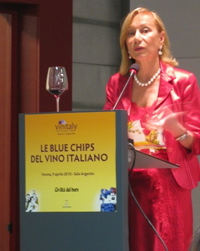 If someone says, “wine is for everyone,” I’ll bet the first thing most people think of is this wonderful new wine culture of enthusiasts and accessible tastings to discover new wines, and more importantly, new favorites.  At the same time, most wineries are embracing that sentiment with enjoyable and well-made “entry-level” wines.  Not to be confused (in most cases) with cheaply made wines, these diplomats travel the world and introduce indigenous grape varietals and wineries to enthusiasts via their value price in supermarkets and wine lists alike, which is great.
What I discovered at Vinitaly, though, is that “for everyone” has a flip side, and actually means for every kind of person–from the casual drinker to the connoisseur, from the weekly budget shopper to the big budget collector.  Think about it, it is the fine wines, ambassadors if you will, crafted by the top producers, which gain notoriety through scores and reviews in big magazines and are usually what create interest in the wineries in the first place.  This “two sides of the coin” approach applies to most everything in life, and I can also relate it to my other passion, auto racing.  There are many levels of competition, from amateur to elite professional; heck, even I have raced in an SCCA club race.  But, it is the premier events that really build the interest in fans and participants.  If there was no Indianapolis 500 or Monaco Grand Prix, would as many people have such passion and dreams to pursue the sport (Would I have belted myself in, scared out of my wits, just to experience what it’s like for myself) So let’s look at the other side of the coin this time, and celebrate the wines that put the wineries on the map and continue to inspire the public…and celebrate the people who are giving a little part of themselves in the crafting of their wines, no matter what their background. 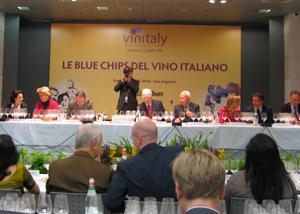 Each year at Vinitaly, there is an exclusive tasting event that happens exactly 24 hours after the expo opens.  This year, I was invited to attend this event, the “Blue Chips of Italian Wine”, hosted by Civilta’ del bere, one of Italy’s leading wine magazines (www.civiltadelbere.com) which for me was like being invited to attend a UN conference.  Representing over 40 countries, the 200 participants were journalists and “authorities of the international public of wine tasting” invited to experience how 12 top wineries in Italy are able to create wines of excellence in quantities large enough to support worldwide demand.
Borrowing from the stock exchange term for the companies who have the highest value based on the number of shares times price per share, the Blue Chips of Italy are those wines sold at a premium price while being produced in appreciable quantities.  Qualifying factors were: being sold in all major markets in the world, and having won at least two awards of excellence from the five main national guides including Duemilavini, Gambero Rosso and L’Espresso, as well as nods from international critics such as Robert Parker and Wine Spectator.

Armed with my headphones, ready to receive live translation (my Italian skills were no match for the speaking velocity and different accents) I again felt like I was sitting in at the UN, and I couldn’t help but think that maybe if the UN had glasses of wine at the table instead of water there would be a lot less arguing…

The first wine to be poured was Planta’s Cometa, IGT Sicilia Bianco 2008, and the parade of suited-up sommeliers from the AIS (Associazione Italiana Sommelier) with bottles in-hand was magnificent as they came streaming into the room.  This 100% Fiano varietal wine, with a ‘juicy’ balance of acidity and complexity was an appropriate representation of the winery’s research into indigenous varietals. In the mid range of production at 88,000 bottles, this wine has a retail price of € 22, or $32.

Moving through the lineup, the first wine I had experience tasting was Mastroberardino’s Radici Taurasi DOCG 2005.  CEO of sales and marketing, Dario Pennino recounted a 2007 vertical tasting of this wine where the 1934 vintage was awarded 99 points by Gambero Rosso. This elegant and delicious 100% Aglianico wine which has won numerous awards and scores over 90 points, has a production of 80,000 bottles and a retail price of €25 or $37.

Allegrini’s Amarone della Valpolicella Classico DOC 2005 was the next wine to grab my attention because, as an Amarone lover, I was impressed by the freshness and layered flavors of this wine made from partially dried grapes–a result of Allegrini’s preference for a more modern style than conventional taste.  Retailing at €60 or $90, the production is 125,000 bottles.

The Tuscan wine that left me wanting more was the Flaccianello della Pieve, IGT Colli della Toscana Centrale 2006 from Fontodi.  It is This Wine Spectator 99-pointer made from 100% Sangiovese has enveloping aromas of ripe berries, spices and leather with distinct yet balanced tannins.  A production of 50,000 bottles, this super Tuscan retails for about €60 or $90.

Finally, the one I had been hearing about, the red giant, with the second-highest production at 180,000 bottles, San Guido’s Sassicaia, Bolgheri Sassicaia DOC 2006, made from Cabernet Sauvignon and Cabernet Franc.  From its intense ruby color to the elegant aromas to the beautifully balanced silky cherry mouthful, I enjoyed every moment of my epiphany as I realized why some wines really do merit their high price tag, in this case, €130 or $195.

I will never again roll my eyes at someone extolling the virtues of a wine like this, and learned that the flip side of the “wine for everyone” coin can be just as interesting and exciting.  Though I am typically an advocate for indigenous varietals, this wine is without a doubt special.
Though all merit comment and exaltation, the following wines, not previously mentioned, completed the tasting:

This particular day, I concentrated more on the organized tastings than going from stand to stand (with 4,200 to choose from, you can end up in wine oblivion!).  One I was particularly excited about attending was that of Podere Castorani winery in Abruzzo, owned by Formula 1 driver, Jarno Trulli.  Racing season has started with its usual changes in rules, drivers and helmet designs, and while searching for news on the internet, I took a minute to check out Podere Castorani’s website (www.poderecastorani.it).  When I saw that Jarno would be at Vinitaly to present his wines at a special tasting, I quickly called the winery to reserve a spot.  Abruzzo is best known for it’s flagship grape, Montepulciano, and the region, amidst rebuilding after the earthquake last year, is determinedly moving forward in many aspects, including showcasing their other varietal gems, and showing how well their wines are aging.  The Abruzzo pavilion, with the slogan “pleasing notes” referring to the wines as well as the region’s devotion to music, was spacious and full of large and small stands alike, with a beautiful tasting area and even a restaurant.

As one tasting was finishing, crowds of people were gathering for the Podere Castorani presentation and I could see Jarno Trulli talking with whom I assumed to be some of his associates.  The first thing I noticed was how low-key he seemed to be.  I could see that this event was entirely about the family winery, no matter that he had just flown in from Malaysia, and in a few days would be returning to China for the next Grand Prix.  I admit, this surprised me, and it made me even more interested to finally taste the wines and learn about their philosophy.  For those of you who have witnessed other celebrity figures venturing into wine, take this into account:  the family farm in Abruzzo was already established in 1793, and the 32 hectares of current estate vines are part of that original land.  Fifteen years ago, the family and business associates decided to build a modern winemaking facility and 2000 was their first year of modern vinification.  With this new facility, Jarno, coming from the world of Formula 1, wants to express the right balance between tradition and technology.  We began the tasting with the 100% Trebbiano d’Abruzzo DOC Coste delle Plaie, with fresh and balanced acidity and minerality and flavors of citrus and exotic fruits.  Next was the Pecorino Colline Pescaresi IGT from 100% Pecorino grapes, which delivered a silky fruitiness with some herbal notes, which made me think of enjoying it with a baked herb and cheese dish.  I am a big fan of Montepulciano, and the next two selections, the Coste delle Plaie and the Amorino were both true to the grape and terroir, and I found the Amorina Casauria Montepulciano d’Abruzzo DOC with its deep ruby-purple color and balanced tannins to be the most delicious, like a mouthful of ripe cherry and plum. 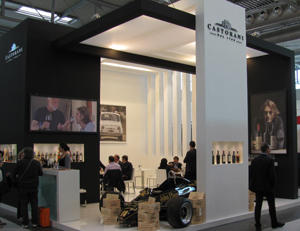 After the organized tasting, I spoke with the winemaker, Angelo Molisani to learn a bit more about the wines at their impressive stand complete with a vintage Formula 1 car at the entrance.  While he poured and explained a few more wines from their lineup, Jarno joined us with one of the winery’s associates and I learned about their philosophy for the international market.  The winery produces both estate wines and wines representative of other regions of Italy, like Barbera, Prosecco and international varieties like Syrah all grown in various regions, then vinified at the estate, allowing this smaller winery to offer a variety of wines representative of Abruzzo and all of Italy to international importers.  Needless to say, the winemaker is extremely busy, but loves the work they are doing.

While pouring the Cerasuolo Montepulciano d’Abruzzo DOC 2009 Rosato, Angelo was explaining a typical dish that might be enjoyed with this wine, the Abruzzese specialty, “Brodetto”, a stew made with tomato, peppers and different kinds of fish.  Angelo explained that Jarno’s father Enzo, who loves to prepare this dish, is an excellent cook and is planning to open a restaurant, much to the delight of those who enjoy his talents.  As for me, I can’t wait to try the Brodetto and happily accepted an invitation from Enzo to visit the winery and try this local delicacy with their wines.

The “wow” wine of the day was the Podere Castorani Montepulciano DOC 2004, the original wine produced by the estate, and what they call “the beginning of the story.”  If “comfort wine” was an acceptable description, I would use it here.  Well-balanced body and tannins, with beautiful color and flavors of spices and berries make this a wine for a meal that you wish would never end. And though I didn’t really want my experience to end at Podere Castorani, it was time for me to move on, and for them to share these great wines with other enthusiastic visitors. I look forward to visiting the winery soon and seeing the beautiful terrain of Abruzzo, with its mountains, coastline and devotion to nature.

As for my impressions of Jarno, for someone who would be justified in safeguarding his privacy, as one of only a handful of elite drivers in the sport’s highest echelon, his availability and genuine interest in this event was impressive. If his hope is to achieve a balance between tradition and the fast-paced world of Formula 1, I’d say he has achieved that in his winemaking and in his lifestyle. Bravo.