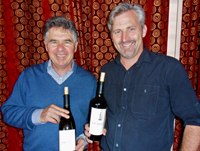 It is always a great day when the best in the world of wine comes to you and asks if you want to taste their wine, and today was like that with top Napa producer Staglin and premier Tuscan producer Felsina dropped in on me in Carmel and showed their wonderful line ups of wine.  It is always a pleasure to see Garen Staglin, of Staglin Family Vineyard and to taste his wines, the Stalin’s are an elite family no question, but they have really given back and deserve lots of gratitude for all they have done for the wine community and their charity. As of today the Stalin’s have raised close to or more than $90 Million for mental health, in support of mental illness care and awareness, which is amazing and truly fantastic. Garen and Sherri Staglin also have a second label “Salus Estate” where all the profits go to mental health research, which is more than most small estates can do for good causes, further still, they put on a great party every year as well for the same cause. Next year they are they will be putting on the 16th Annual event, the Napa Valley Music Festival for Mental Health at the Staglin Family Vineyard in Rutherford on September 11, 2010 that will feature Dwight Yoakam and close to a hundred premium wineries pouring their wines as well.

Staglin employs David Abreu to oversee their vineyard and the famed Michel Rolland to direct the winemaking, so there is good reason to get excited about this estate and their cave is amazing to visit, let alone tasting to wine itself, which is always rated as one of the great wines of the world, not just one of the top wines of Napa Valley. Staglin has received praise from new world and old world press as well as the likes of Robert Parker, James Laube and Jancis Robinson, three of the best wine writers and critics, so it is great to get a chance to try it myself and relate and revisit my own views on the Staglin Family Vineyard.

I have been blessed to have been able to try most of the famed vintages in the past and have been on a tour of the cave and estate, all of which have impressed me greatly and I must say, even as jaded as I any wine buyer or wine writer can get, I am always delighted to try these wines. Staglin is most known for their Estate Cabernet Sauvignon, but they also make a world class Chardonnay and even a little bit of Sangiovese. Then they also make the Salus Chardonnay and Cabernet Sauvignon from 100% estate grown grapes.

The 2006 Staglin Family Vineyard Cabernet Sauvignon Rutherford Estate, Napa Valley is the new release and I must say it is a great wine and really enjoyed the beautiful nose and elegant texture is has all ready, without a doubt this wine competes with the heavy weights of Bordeaux for class and style. The 2007 Staglin Family Vineyard Chardonnay Rutherford Estate, Napa Valley is modeled after the Grand Cru Burgundies of Montrachet and it shows good depth and character with pretty pear and white peach layers.While the Chardonnay is a nice and refined wine, it really is the Cabernet that steals the show and makes the grade even in this price level. At $175, the Staglin still manages to compete well as a value as weird as that might sound! But, it does, when you look at Harlan at $500-650, Opus One at $225, Joseph Phelps Insignia at $200 and Chateau Mouton-Rothschild at $300-750 all make the Staglin look like a steal! Especially when you look at the critical scoring of these wines since 1995 to now and prices, it shows the Staglin is not only a great wine, but also one that ranks with the best.. 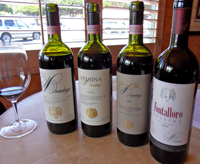 When you think of Tuscany and Chianti Classico you can’t not help, but consider Felsina, the iconic prestige Chianti Classico producer, recently named winery of the year for Italy and a winery that has been turning out amazing wines of late. I had some experience with this estate while a wine buyer, and got to enjoy their 1997 releases and well as a few 1995’s as well, then have enjoyed a few more modern vintages over the following years. In 2002 I travelled through Tuscany on vacation and I have a certain fondness for this region and know the Chianti Classico area from a personal perspective, which has made me a fan for life.Felsina Berardenga winery sits on the southern most border of Chianti Classico near Castelnuovo, closer to Siena rather than Florence if you are mentally looking at a map of Tuscany. Felsina focuses on Chianti Classico and the grape of native Tuscany the Sangiovese, and I must say it would be very hard to find a better Chianti Classico or Sangiovese than what Felsina makes. Beyond the Classico, Felsina also makes an IGT Rosso, or all Sangiovese “Super Tuscan”, though I consider the term “Super Tuscan” as a traditionalist, in that it means a wine made in Tuscany including international varietals, so an all-native Sangiovese wine from a non-classified area would be an IGT Rosso. Their other Sangiovese is called Fontalloro and is their flagship wine made from grapes on the estate that are outside the Classico region, and it is from a special terroir that has perfect exposure and soil to get the best out of Sangiovese and it has been proven to great success in many, many vintages. Fontalloro is a massive and glorious wine that deserves every accolade and I was very impressed by the latest release as well as all of the Felsina reds I was shown recently by Caterina Mazzocolin of Felsina. 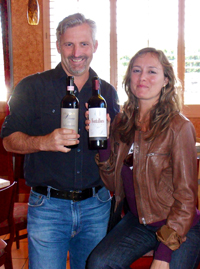 Caterina explained that Felsina has great vineyards in Chianti Classico, 11 parcels of which they use for different wines, with all eleven going into the basic Chianti Classico, then a selection of up to seven for their Chianti Classico Riserva, then the single cru site “Rancia” for the Rancia Chianti Classico Riserva that is their top Chianti and a sublime wine that has finesse and richness not usually found in Chianti and I would compare it to a top Bordeaux in a sense, though it is pure to its grape and region. Felsina Berardenga makes extraordinary wines that deliver layers of flavors that are focused and lively making the most of Sangiovese. The basic 2007 Felsina Berardenga Chianti Classico aged in neutral big ovals (oak) has bright and young fruit, though rich in flavor and a gem with food. Next up is the 2006 Felsina Berardenga Chianti Classico Riserva which is aged longer and is both a vineyard and barrel selection, that does show a big difference and makes for a darker, deeper and more perfumed wine. This wine is magic and sends me straight to Tuscany in my mind with lush berry fruit and lovely balance, if you like Sangiovese and Chianti, you must try this wine. Felsina’s other Classico Riserva is the cru, 2005 Felsina Berardenga “Rancia” Chianti Classico Riserva that is more edgy and tannic, much more like a young Bordeaux and with the French oak almost tastes like one at first with smoke and pencil lead, before opening up and giving classic Sangiovese character. While more intense than the regular, this wine is a joy for any serious wine lover and a wine that will age gracefully and worth keeping your hands off for a few years in the cellar. This wine is on the same level as a Brunello and worth every penny if you can find it, and I suggest a little extra effort and time to find this wine, it will prove rewarding I swear!

Then there is the aforementioned 2005 Felsina Berardenga Fontalloro, a wonderfully textured and bold Sangiovese that explodes on the palate that is more modern in style than the “Rancia” and fills out in the mouth with sweet red berry fruit, though returns to more classic Sangiovese on the finish, again rivaling top Brunellos for richness and depth. As much as I taste wine and am lucky enough to try many interesting wines, this line up hit me and left me wanting more, Felsina is a winery to watch and look for if you haven’t tried any and a winery that is worth searching hard for. I also intend to pay a visit to this place when I return to Tuscany!