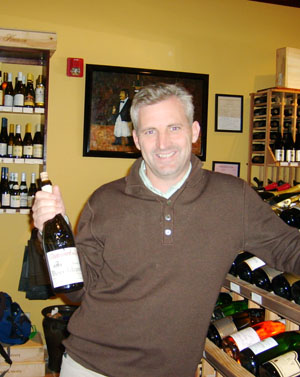 This change of season brings the end of harvest and the time of year for new releases, so it is a thankful time and one to savor. It looks as if 2007 Harvest brought a very good vintage, as most of the growers I’ve talked to have said the magic combination of tiny berries and low yields have been uttered many times and that usually means top quality. This means great wines are fermenting in barrel or tanks, but in the meantime we have the new releases hitting the market now. 2005 and even some 2006 wines are popping up, in this case I mean red wine, as 2006 whites have been around for awhile now, and I can tell you both the 2005 and 2006 are super vintages! Look for great 2005 Cabernets to start hitting the selves near you and I say buy them up now before those critics start giving scores! I tried a couple of new releases, 2005 Keever Cabernet Sauvignon Napa Valley ($69 Est.) and 2005 Parsonage Cabernet Sauvignon Reserve <Click Here for 2005 Parsonage Reviews> both of which were awesome! The Keever is going to be a huge deal, a wine to watch for sure. Both wines rated in the mid to high Ninety point rage! The 2006 vintage Syrahs and Pinots are now just being let loose and show lots of promise, in fact they are fantastic! I fell head over heels for the 2006 Pax Syrah Hillside Sonoma ($50-55 Est.), it is a big wine, but is drinking great and super thick with almost black color! As for 2006 Pinot, it is great and less acidic than 2005, though it has sublime balance and depth, one that got my attention was the 2006 Drew Family Pinot Noir “Gatekeeper’s” Santa Rita Hills ($45 Est.) This was an amazing Pinot with intense flavors and deep complexities. So we have much to enjoy about this fall!