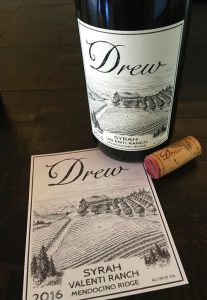 2016 Drew, Syrah, Valenti Ranch, Mendocino Ridge.
Jason Drew in the last 3 or 4 vintages has arguably been crafting some of California’s absolute best wines, with both his Pinot Noir and Syrah lineup, these are just fantastic reds with amazing purity and intense detailing, it is seriously hard to find anything but near perfection in all of them, but I am always drawn to this Valenti Ranch Syrah, so it was with extreme excitement I got my first taste of this 2016 vintage, and of course it is a mind blowing experience in the glass! Valenti is planted to Chave (Hermitage) and Clone 1 selections and at about 1,300 to 1,400 feet on oceanic sedimentary and gravelly loam soils of the ultra cool climate Mendocino Ridge AVA that allows limits yields and gives classic Northern Rhone character along with deep California fruit and natural low alcohol. Jason co-ferment 5% Viognier, very Cote-Rotie like, with 25% whole cluster using 100% native yeast and guided a gentile fermentation and long maceration before raising the Valenti Syrah in barrels, 75% used French barrique along with 25% Hungarian oak, only gravity flow racked twice to clarify. Drew, since 2013, does all the farming at Valenti, which is now done to organic practices that seems to make this wine explode with energy and terroir personality, in the last couple of vintages it could be my favorite red wine under $50, and this 2016 is not far off if not even better for it’s heighten sensations and delicacy of a lighter vintage, though I do love the density and depth of the 2014 and 2015. If you are on Drew’s list and received this 2016 Valenti, give it another year in bottle at least, but dear God it has amazing potential and it is a sexy, sexy wine with layers of crushed violets, peppercorns, creme de cassis, wild plum, olive tapenade, minty/salty licorice and just the right amount of nervy stem notes. I can’t recommend Drew Family Cellars more highly, this is a must join list, and this 2016 Valenti Ranch Vineyard Mendocino Ridge Syrah is as good as it gets, best from 2020-2028.
($48 Est.) 94 Points, grapelive 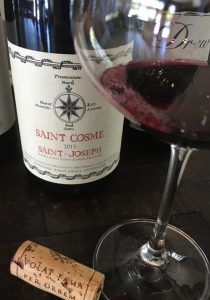 2015 Saint Cosme, Saint-Joseph Rouge, Northern Rhone, France.
Ancient Syrah clones, steep granite slopes and from historic vines that were first developed by veterans of the Roman armies, Saint-Joseph is home to some of the world’s prettiest wines, included without question is Louis Barruol’s négociant Saint-Joseph Rouge, which is an insane value and gorgeous, made with 100% Sérine clone Syrah. (Sérine, the mentioned ancient and local variety of Syrah that is remarkably different than the more modern clones) Barruol uses a special site called the Malleval lieu-dit for his lovely Saint-Joseph, the microclimate of the vineyard is “very cold” which allows the fruit to maintain a bit more acidity, that intern gives extra lift while being fully ripe and with silky tannins. This wine is made from 70% destemmed grapes with 30% whole clusters, fermented with indigenous yeasts, and aged in 20% new 228-liter barrels.Don’t be fooled though, this is a very serious and meaty wine, especially in this riper year, though the sweet tannin and opulent texture allows for immediate hedonism and early drinking pleasure with layers of lush red and black fruits, subtle spice, floral tones and a sanguine streak. The nose has an array of raw meat, iodine, powered incense, kirsch notes, forest berries, plus hints of pipe tobacco, earth and dark flowers before replaying that theme on the palate adding damson plum, racy black raspberry, briar edginess (stems) and spicy lavender. In some ways this comes across as satiny as a Premier Cru Burgundy and it’s lifted acidity, while subtle in form adds to a more delicate feel, there is a bit more to come here in my opinion, but it’s highly desirable even now, though best with food obviously. Tight and with a touch of reductive funk that mutes the aromatics at this stage, things get much more open with decanting and this Syrah should prove a long lasting sleeper for the cellar as well as being a rewarding wine in the next 3 to 5 years.
($28 Est.) 92-94 Points, grapelive 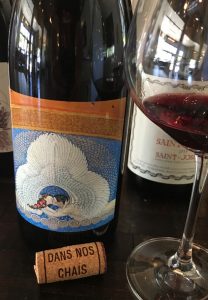 2015 Le Temps des Copains by Frederic Niger (Domaine de L’Ecu), Syrah “Nobis” Vin de France, Love & Grapes Project, Rhone Red, France.
Made at Frederic Niger’s Domaine de L’Ecu in the Muscadet region of the Loire Valley, the Le Temps des Copains Love & Grapes Project “Nobis” is a 100% Syrah from southern Rhône that is fermented & aged in stainless steel tank and bottled with minimal sulfur, it’s the entry level offering, but it delivers expressive detail and drinks wonderfully with a lovely deep dark garnet hue and a fresh vibrant intensity. Not a big wine, on the lighter side, especially at first it seems zippy/juicy with a tart edge, but as it gets air it fills out to a medium bodied red that turns satiny and more polished with a riper tone, which goes perfectly with the vintage adding boysenberry, raspberry and plum to go with the initial cran/blueberry and tangy cherry along with light spices, loam and mineral elements as well as a hint of violets, currant and framboise, lingering with some saline, chalky stones and fennel. This fresh and pure Syrah is a wine that has a surprising grip and long aftertaste, but drinks easy enough to be a fun quaffer for BBQ’s and goes better with robust and rustic cuisine.
($18 Est.) 90 Points, grapelive

2016 Julian Cecillon, Syrah “Bel Horizon” Collines Rhodaniennes IGP, Northern Rhone, France.
As a fan of Cecillon, especially their Crozes-Hermitage and Saint-Joseph, it was fun to grab a few bottles of his entry level offerings, in particular this 2016 Bel Horizon Syrah, it’s a classic lighter version of his wines from grapes outside the main AOC, but within the recognized collection of plots that make up the IGP of Collines Rhodaniennes, which once were historic sites that date back to Roman times. Cave Julien Cecillon is a joint project of winemakers Julien Cécillon and Nancy Kerschen, an American winemaker, with both having combined experiences working for various international wineries including the famed Yves Cuilleron, along with others like Christophe Curtat, Fabrice Gripa, JC Cellars, Clos du Val, Saintsbury, Indevin and Saronsberg, they are a passionate team and their wines show it. The Bel Horizon cuvee is 100% Syrah, grown on granite soils, and comes off several scattered parcels of Syrah bordering on both St Joseph and Crozes Hermitage appellations, with most coming from old vines that are over 80 years old that had been previously classified in AOCs. They report that most of the reds get native ferments and maceration and crushing in open tanks (stainless steel and fiberglass) then getting a lengthy time with punch downs and pumpers before racking over to cask for malos while the elevage was in 90% in used barrels that on average were seasoned between 4 to 5 years, with the wine aged on the fine lees for about 10 months, interesting also they do a Gamay as well, sourced slightly north of their main vineyards. Medium bodied and lightly perfumed, this is seriously good stuff, it has layers of classic boysenberry, blueberry, plum and strawberry fruits, graphite, minty herb, cedar, kirsch and a whiff of bacon as well as subtle pepper and dusty stones. Imported by Balanced Wine Selections/Paris Wine Company, Cecillon is a label to check out, especially the Crozes-Hermitage and this Bel Horizon cuvee.
($24 Est.) 91 Points, grapelive

2014 Chesebro, Syrah, La Mariposa, Cedar Lane Vineyard, Arroyo Seco, Monterey County.
Mark and Will Chesebro’s single barrel Syrah with a touch of co-ferment Viognier, Cote-Rotie style La Mariposa was just released and was available as of 4/20/18 in their Carmel Valley tasting room, it is a seriously good cool climate Arroyo Seco example that you’ll want to get sooner v. later! Showing a rich body and full flavors, you be surprised by the extremely modest low alcohol, it comes in at just 12.5%, very Northern Rhone like, with air and swirls there’s even more surprises in the glass gaining intense layers of spice, earth, meaty notes and sweet floral tones as well as light kirsch, wild herbs and gripping peppercorns. The main profile leans towards boysenberry, plum and black raspberry fruit which is amplified by Italian green olive and racy spearmint, with a long refined finish that recounts all the mentioned elements. The grippy tannins are well managed by the medium/full density and while easy to enjoy it will show it’s complexity and best form with hearty cuisine, this is an impressive and showy effort from Chesebro, you not want to miss this limited bottlings, the 24 cases will go fast, drink over the next 3 to 5 years. One of Monterey’s sleeper wineries, Chesbro offers a quality and value set of wines that offer an authentic well crafted sensibility and restraint, their zippy Vermentino and vivid Grenache Blanc are gems, plus the dusty dry Rose is one of my favorites, if you want to understand and taste Arroyo Seco’s terroir then this is your place to start, these are wines with a true and transparent character of place.
($32 Est.) 91 Points, grapelive

2014 Twill Cellars, Syrah, Willamette Valley, Oregon.
The excellent Twill 2014 Syrah is a blended cuvee that best reflects the vintage for Oregon, It is comprised of three vineyards, two from the Applegate Valley, including Steelhead Run, Twill’s top Syrah vineyard site where they also do a single vineyard version, and one from the Umpqua Valley. As the winery itself puts it, Twill Cellars is a small Oregon wine project presenting the influence of land, weather and craft in a vinous assembly, from sustainable vineyards and using longer evevage which adds a textural pleasure that does show through on the Syrah making for an impressive wine. The wines spend 18-22 months in mostly neutral barrels with no added yeasts or enzymes, and minimal SO2 during aging, this minimalist approach pays off here allowing for what are young vine lots to come through without any harsh tannins, while still having a real palate impact and refinement, this 2014 Twill Oregon Syrah delivers a solid and inspiring performance in the glass with a nice bouquet of dark berries, rose petals, fig paste and espresso bean that leads to a rounded palate of blackberry, blueberry and cherry fruits along with hints of cedar, anise and a peppery spices. There is a sensation in the mouth where you get more Pinot Noir like profile, but that is not a criticism as it drinks gracefully and with a full array of Syrah flavors that include boysenberry, plum, blueberry and kirsch, some white pepper, cedar, minty herb and a hint of mocha. This is an easy drinking Syrah that should provide plenty of enjoyment and pleasure over the next year or three max, drink now.
($24 Est.) 90 Points, grapelive