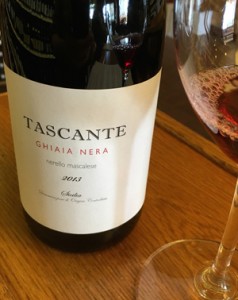 2013 Tenuta Tascante-Tasca d’Almerita, Nerello Mascalese, Ghiaia Nera IGT Rosso, Sicily Italy.
Grown on the north side slopes of Sicily’s Mount Etna volcano this 100% Nerello Mascalese Tascante Ghiaia Nera “Black Pebbles” is from terraced lava rock vines and a cooler site than the south exposure, making for a lovely expression of delicacy and detail in this wine. Often called the Burgundy of the volcano, or Sicily, Nerello Mascalese has silken tannins, a flavorful lighter body, ruby color and heavenly length, especially intriguing and remarkably priced for the quality is Tasca d’Almerita’s Tascante, an artisan estate making just Nerello Mascalese and a white Carricante. The 2013 Ghiaia Nera starts with flinty spice, earth and dried rose petals as well as fresh strawberry, raspberry and poached plum with satiny fruit, vibrant acidity, shale/saline and tangy lavender, peach and herb tea notes. Not as dense of deep as some of the more famous Foti influenced wines of the Mount Etna DOC, but certainly a great place to start if you want to try this mysterious varietal that drinks like a sexy Pinot Noir, but has the unique terroir character and rustic charm of the island, this is very much a winner. Drink this medium weight, low alcohol Nerello Mascalese over the next 3 to 5 years, it is an impressive package and a value!
($22 Est.) 92 Points, grapelive