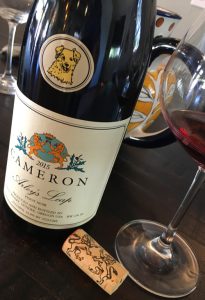 2015 Cameron Winery, Pinot Noir “Arley’s Leap” Willamette Valley, Oregon.
John Paul is an Oregon legend and his wines just as legendary, especially his Pinots, like this one from A slightly younger vine planting within Abbey Ridge vineyard, that was planted in 1990, and Cameron Winery, part of the Deep Roots Coalition is sustainably farmed, non-irrigated and has been fanatically Burgundy influenced, since Paul started producing wine here in 1984. He uses mainly Dundee Hills fruit, the estate Clos Electrique and Abby Ridge, as well as a newer parcel in Ribbon Ridge, his Clos Electrique and his Abby Ridge bottlings are his top old vine cube’s, but his regular Willamette Valley, Dundee and Reserve offerings are stunning as well, with this Arley’s Leap being new to me, and one I was thrilled to get my hands on! The eponymous hero, on the label, was Bill and Julia Wayne’s old dog Arley, who survived a jump from a second story balcony when startled by a cat. Abbey Ridge is one of the highest vineyards in Dundee and is picked relatively late, it’s farmed pretty much all organic and allows for deep flavors and complexity, it’s significantly cooler and with it’s Jory soils, which are volcanic based there is a lot of natural acidity that helps with balance and gives these wines tremendous aging structure along with a slightly exotic character. 2015 is looking like an outstanding vintage in Oregon and John Paul took advantage of the year to craft an amazing set of wines, and in my opinion, this Arley’s Leap is a sleeper, in particular it’s a earthy dark beauty that is wonderfully expressive and intriguing. This 2015 shows the years ripe personality, at 13.9%, but thrills for it’s brilliant energy, tanginess, a porcini note, forest floor and rustic charm that resembles a fine Nuits-Saint-Georges! This stuff entrances with a heady mix of plum, black cherry, strawberry, dusty red spices, minty herbs, crushed violets and a touch of leather adding to the dense kirsch, currant and wilted rose petals, making for an amazing palate and bouquet, it’s very much sex in a bottle as only a great Pinot can be! Paul employs traditional Burgundian winemaking and subtle well integrated French oak, it’s as good as it gets, drink over the next decade, it will fascinating to see how this ages!
($46 Est.) 94-96 Points, grapelive