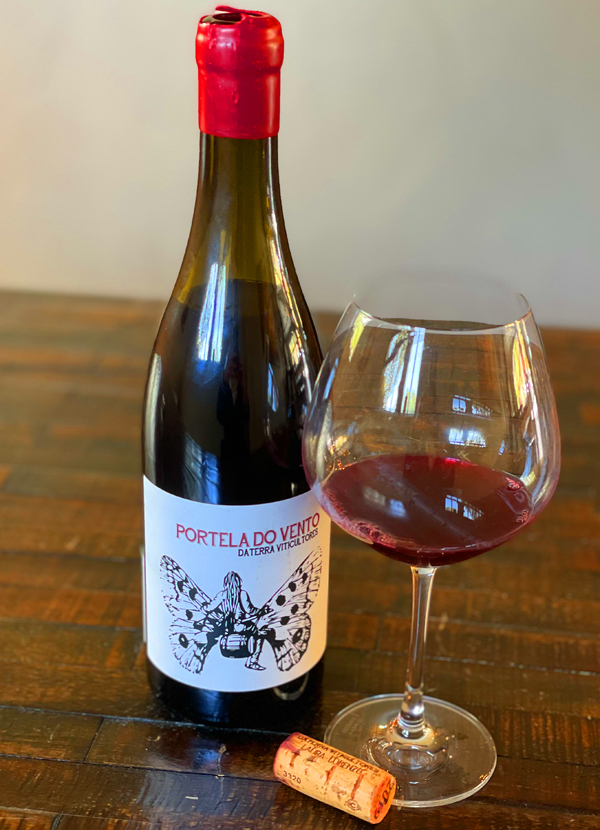 2019 Laura Lorenzo – Daterra Viticultores, Portela do Vento “Granito” Viña Tinto, Ribeira Sacra, Galicia, Spain.
One of my go to Spanish wines is this cuvee, by Laura Lorenzo, from a Ribeira Sacra vineyard, called the Portela do Vento that is made from the Mencia grape, which is a varietal that has elements similar to Syrah, Carignan, Pinot Noir and Gamay showing mineral notes, spice, dark berries and good acidity from the cool Atlantic climate here. The 2019 shows a deep purple/garnet color and drinks beautifully with bright intensity and earthy charm, opening up on the medium bodied palate it flows with Fleurie like aromatics showing seeped rose petals on the nose, while the mouth reveals tangy black currant, cranberry, strawberry, wild plum and cherry fruits along with a hint of leather, flint, snappy herbs, old cedar, anise and forest floor accents. This vintage has an authentic raw quality that makes this Portela Tinto wonderfully compelling stuff, best served with rustic cuisine and with a slight chill, it is a un-flashy wine, but with subtle beauty and a joy in the glass. Laura’s winemaking is non-interventionist, meaning that she ferments with native yeasts and works with very little sulfur (S02), focusing mainly on vineyard expression and as she notes, the wine is moved by gravity only, whenever possible, with all the wines being unfined and unfiltered. This Portela do Vento Tinto, which comes from several south-facing blocks or terraces of mainly Mencía and in some years sees a little interplanted Garnacha Tintorera, which is the local name for Alicante Bouschet, in the Amandi and Quiroga-Bibei subzones. This vintage was done slightly different, as normally it is mostly de-stemmed and indigenous yeast fermented in stainless steel vats then raised in neutral 500 liter French barrels to capture the true essence of the terroir and make for the purest expression of the native varietals, while this 2019 came from a single Amandi parcel of 100% Mencia, 50 year old vines, set a bit lower down, closer to the Sil River on sandy granite soils. The process for this 2019 saw less if any whole bunches with primary fermentation and aging in a single used large 4000L French Foudre, all of which is what Laura says the grapes asked for.

These Daterra Viticultores wines have turned into a favorite of mine and I’ve been following Laura Lorenzo for years now, she is one of the best and most hardworking winemakers in Spain and her natural style wines are in league with some of the world’s finest, she joins fellow women winemakers Elisabetta Foradori and Arianna Occhipinti in making striking terroir driven wines using native varietals. Lorenzo even knew as a child that this was her calling and at the age of 16 she enrolled in the local enology school, it was something she really had a talent for. Upon her graduation, she got her first professional gig at the nearby Adega Cachín, but soon she out grew the position, so she ventured overseas, first with the legendary winemaker Eben Sadie in South Africa and then off to Achaval Ferrer in Argentina, both of which provided her with imagination and passion to make special wines from her native Galicia. She turned the little known Dominio do Bibei, a pioneering producer of fine wine in the Quiroga-Bibei subzone of Ribeira Sacra into a world class and sought after label. After close to a decade there, she decided to do her project, creating Daterra Viticultores and releasing her first vintage in 2014, which I was lucky enough to get a few bottles of, after getting hooked on the Dominio do Bibei that she made. Laura, not forgetting those that came before her, says the name Daterra Viticultores pays tribute to the many women and men who have spent the course of their lives on the Manzaneda mountainsides in the Bibei valley cultivating these vines that now provide the fruit for her efforts. She works these incredibly steep sites all by hand and without transportation, as there are almost no roads leading to these terraced granite, sand and slate hillsides above the Bibei and Sil rivers. Lorenzo has brought holistic and organic methods back to the region and has restored the natural balance to her sites which in turn has brought out the best in the grapes and the wines clearly so what her efforts have accomplished here with sublime quality and individual distinction, as this 2019 Potela do Vento displays. The Ribeira Sacra, as I have mentioned in prior reviews, means “Sacred Banks” and has been a growing region for more than 2,000 years and was cherished during Roman times, and only recently saw a renaissance, largely because of the wines of the likes of Paul Perez, Pedro Rodriguez of Guimaro and Laura Lorenzo, it’s a great time to explore these wines.
($35 Est.) 94 Points, grapelive