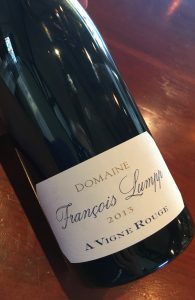 2013 Domaine Francois Lumpp, Givry Premier Cru “A Vigne Rouge” Red Burgundy, France.
This Domaine is getting a lot of buzz for value, and I was very excited to try this Givry, not to be confused with the more prestigious Gevrey-Chambertin, by Francois Lumpp, this area is in the Cote Chalonnaise, not far from the more famous Mercurey. There are a total of 240 acres of red and just 24 acres of white in the 27 climats within the Givry AOC (appellation) that are classified as Premier Cru vineyards, with wines designated Givry Premier Cru that show a vineyard name, or, as allowed, just Givry Premier Cru, in which case it is possible to blend wine from several Premier Cru vineyard sites within the AOC, with this Lumpp A Vigne Rouge cuvee being the former, it’s a single vineyard Premier Cru Givry. The region is known for both red and white with Pinot Noir and Chardonnay being the main grapes as you’d expect and even though it’s a lesser known place, Burgundy fans have long looked here for purity, character and especially value, and with this Francois Lumpp you can see why. Kermit Lynch now imports Lumpp, who was founded in 1991 and produce just about 4,000 cases annually, every wine François makes is from Givry, and interestedly from vineyards that he himself planted and nurtured–something that is exceedingly rare in Burgundy today, his vines are a massale selection of old bud wood grown on in this case a mix of Oxfordian Nantoux Limestone, Fine Marl, and Clay with A Vigne Rouge coming off 15 year old vines with Southern, Southwestern, and at 850 feet above sea level. Givry’s best premier cru sites, which is the case in most of the Côte d’Or (Burgundy) are situated on the mid to upper level slopes of the rolling hillsides, these form the base of Lumpp’s holdings (all of which are in fact Premier Cru plots, except one white Lieu-Dit). Lumpp uses stainless steel to ferment with gentile punch downs then the wine is raised in barriques, of which surprisingly are about 70% new each vintage, the Premier Crus get one year in barrel as this one did with only one racking to clarify before bottling. This 2013 is astonishingly fresh and deeply flavored with a rich dark garnet/ruby hue and a vivid grapey nose that leads to a textured palate that shines with blackberry, plum, bramble berry and cherry fruits along with a streak of mineral, earth and briar adding sweet woody notes along with hint of tobacco, tangy currant, minty herb and apple skin. The tannins are supple, but firmer than you’d expect of a wine of this vintage and there’s a lot of pop from vital acidity, while being rather lush and dense, certainly this Burgundy has ages to go and it’s a huge bargain, best with robust cuisine, and it must be said it has resolved almost all the oak making for real entertaining and stylish wine, drink almost guilt free, best from 2019 to 2026.
($39 Est.) 92 Points, grapelive