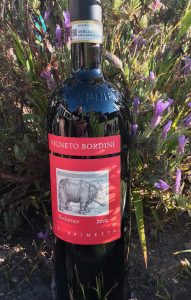 2012 La Spinetta, Barbaresco “Vigneto Bordini” Piedmonte, Italy.
Over the last 6 months I’ve tried the La Spinetta Vigneto Bordini 2012 three times, each time the experience gets better and more pleasing, to the point where it is really starting to show it’s true personality and perform in beautiful fashion. There’s no question the 2012 is lighter and more vibrantly fresh than the 2010 and even the 2011, it has a more delicate nature and softer tannins making it a lot more open, but with less concentration and power. I would expect even better things will come in the short term with this very pretty Nebbiolo, it certainly is a wine that will be enjoyable in the near term and should be a wine to drink in the 3 to 5 years. A bit of tropical fruit and exotic spices add to the intrigue in La Spinetta’s Vigneto Bordini Barbaresco that delivers wilted roses, bing cherry, wild plum and raspberry as well as light earthy notes, tangy guava jelly, mineral tones, star anise and cedary spice. The medium weight frame and juicy character highlight the Bordini’s forward nature, but with air this wine settles down into a more classic style Nebbiolo that gains a fuller presence and pedigree as you’d expect from Giorgio Rivetti, this is a very solid and focused red that is at it’s best with robust cuisine. This ruby hued wine with bright orange edges will surprise a few, and it is well priced, think of it is a Cru Starderi light, which it feels like, and that is not a bad thing!
($63 Est.) 91 Points, grapelive