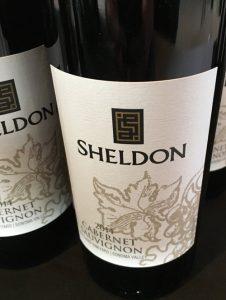 2014 Sheldon, Cabernet Sauvignon, D’ Allaird Vineyard, Sonoma Valley.
This great young Cabernet is a very vivid and fresh style, almost like a Loire Valley wine in nose and vibrancy, but with classic dark fruits on the palate, this wine comes in at a refreshingly low 13.4% alcohol and with a medium/full mouth feel. Dylan Sheldon has been crafting this unique Sonoma Valley Cabernet for a few vintages now from old vines at D’ Allaird Vineyard a semi high tall stalk pergola grown site that allows for wonderful ripe juiciness in the grapes with brown seeds and soft tannins that allows for native fermentations and whole cluster pressing. If you enjoy Bordeaux or Santa Cruz Mountains Cabernet like Bates Ranch or some lighter vintages at Ridge Monte Bello you’ll be thrilled with this wine, it really gains intrigue with every sip after an initial shy and zesty start. The 2014 Sheldon D’ Allaird Sonoma Valley Cabernet is a two barrel micro production offering that starts with light floral notes, mineral spice and sage/herb elements, similar to a Chinon from the Loire Valley, within minutes true Cabernet fruit and expressiveness shines through with ripe/sweet tannin infused blackberry, tangy currant and kirsch notes along with almost no oak influence, but with hints of pepper, cinnamon, black licorice and lavender. The finish is crisp, though lingers on and on, this is a lively and seductive youthful wine that is impressive and an almost anti-Napa Cabernet that is great with less heavy cuisine, this Sonoma Valley Cabernet Sauvignon follows it’s on path with plenty of California openness, but with a cut of energy and focus. Drink this Sheldon D’ Allaird Cabernet Sauvignon over the next 3 to 5 years, and be sure to check out Sheldon other new releases and current wines such as there Petite Sirah/Cabernet Sauvignon field blend The Red Hat as well as their geeky cool Graciano.
($40 Est.) 92 Points, grapelive