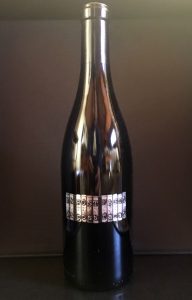 2016 Greg Brewer Wines “Ex Post Facto” Syrah, Santa Barbara County.
The Ex Post Facto by Greg Brewer, is a pure Syrah from one of state’s best artist/philosopher winemakers, his wines, especially this new project, are thinking man’s wines, but with a bit of whimsy and magic! Ex Post Facto (which means in Latin: with retroactive effect or force.” is Greg Brewer’s most recent wine (Syrah), he is more famous for Chardonnay and Pinot Noir, with his Brewer-Clifton wines being post modern icons, but he has made some fantastic Syrah in his past, from his time at Melville, including his versions of Donna’s there, they were awesome wines often rivaling the best from Alban, Ojai and Sine Qua Non, which were some of the greats of the region at the time! And his search of zen purity and sense of place is legendary in the Santa Barbara region. These are not wines to miss out on! It’s funny to say or think, but I love Greg’s Syrah(s), always have, I feel they show a freedom that sometimes is lacking in his other wines, the come across more wild and natural, maybe it is just my personal interpretation or projection, it’s just the way they hit me and I love the racy and nervous intensity that have, the stemmy vigor and force that drives them intrigues me from head to toe! This 2016 Ex Post Facto, sold through Brewer-Clifton, where you can also get his Diatom Wines too, is beautifully detailed with exceptional layers of gripping flavors, it’s richly full on the palate, but full of vitality, class and cool climate character with a cascade of violets, briar spice, boysenberry, damson plum and opulent kirsch adding peppercorns, blueberry, cassis, minty/anise, mineral tones, tapenade, cedar and shaved vanilla. Everything vibrant and of course youthful at this stage, gaining density with air, at 14.5% it’s not a shy wine, but complex, balanced and with gorgeous dimension, it will appeal to fans of Cornas and Cote-Rotie as well as those that like Pax, Drew, Piedrasassi, Halcon and Stolpman, and even better yet, it is a great value, highlighting the fact that some of California’s best red wines can be under $50 and made from Syrah! I have been dying to get my hands on this new wine from Greg for months, ever since he told me he was doing this Ex Post Facto Syrah project, and it has met and surpassed my sky high expectations! Look for this is be a must have wine, it should reward mid term cellaring too, I plan to hide a few bottles from my greedy self to re-discover in 5 to 10 years time, it has some serious potential. As, I suspected, Greg used 100% whole cluster from an ultra cold site with 3 months in the fermenter, an unheard of length of time, which certainly shows in the depth here and he employed the eldest barrels he could find in the cellar in classic Northern Rhone traditional winemaking, and yes, I’m a stems freak and this is my holy grail.
($32 Est.) 94 Points, grapelive