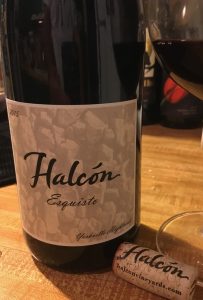 2015 Halcon Vineyards, Esquisto, Rhone Style Blend, Yorkville Highlands.
Halcon’s Chateauneuf du Pape inspired red Esquisto 2015 is extremely tightly wound, with staggering concentration and power, but still reveals gorgeous layering and pretty details, this beauty needs time to fully unfold and express itself, it is seething beneath surface with explosive fruit, spice and provincial herbs. This year worked out to be about 60% Grenache, 35% Mourvedre, both co-fermented and 5% Syrah blended in closer to bottling, making for California version of Rhone wine that has a nod to old school Chateau de Beaucastel or Vieux Telegraphe, though maybe with it’s more cool climate character it is more similar to Domaine Gramenon or the Gigondas wines of either Saint-Cosme or Domaine du Grand Montmirail, the Halcon Esquisto’s 30% whole cluster gives plenty of intensity of wild herbs, peppery spice and exotic tones of dark fruit. Scott Shapley, who also works with Roar, has done a fantastic job guiding these latest releases, as well as continuing to make nervy and exciting wines from selected stony terroir driven Mendocino and Anderson Valley sites, along with their original consultant, Copain’s Wells Gutherie, who gets Syrah fruit from Halcon’s estate vineyard. The 2015 was a tiny crop do to poor set and shatter, only 1.27 tons were picked for 3 acres, making for only 80 cases for this Halcon Esquisto to be available, so don’t wait long to find this wine! Vibrant and edgy with a deep purple/black and garnet edged color the Esquisto starts with a mix of violets, lavender, peppercorns, flinty/rocky spice and black currants before reluctantly releasing it’s grip to show blueberry, black plum, loganberry and fresh briar laced vine picked boysenberry fruits with a whisper of dusty pepper, iron/mineral, a touch of tangy sage, celery seed and anise. Aged in neutral French Puncheons this dark fruited wine has ripe tannins, crisp acidity and feels a bit lighter than it’s 14.5% alcohol would suggest, it will certainly fill out with time in the bottle, if you want to open this wine now, a decanter is a must, as is rustic or robust cuisine, I, in fact, found this wonderful wine much better after a full 24 hours after opening, as suggested by Halcon’s Paul Gordon, confirming my impression that this is going to be a legendary wine in 5 to 10 years! The Grenache really comes alive with air and delightful creme de cassis, cinnamon, strawberry compote and kirsch lingers on and on, this is absolutely thrilling stuff.
($32 Est.) 92-94 Points, grapelive