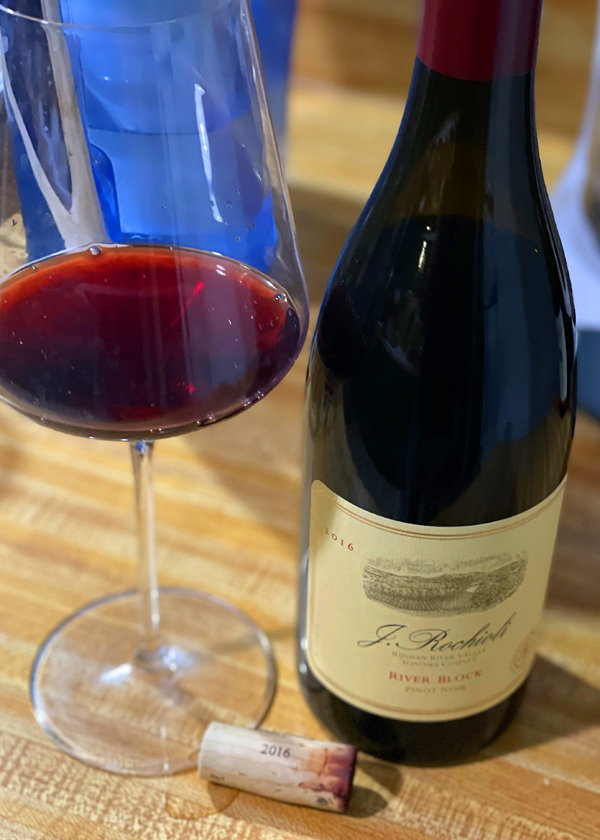 2016 J. Rochioli, Pinot Noir, River Block, Estate Grown, Russian River Valley, Sonoma County.
I just learned of the passing of Joe Rochioli Jr, one of California’s treasures, a pioneer in the Russian River area, who helped put the state’s Pinot Noir on the map, so it was a fitting tribute to him and to the whole Rochioli family to open this gorgeous 2016 vintage River Block Pinot. It took me more than seven years to get on Rochioli’s mailing list and I took many day trips to the winery on Westside Road to get any bottles I could from the mid 1990s until now, so it was sad to get Rachael Rochioli’s email announcement that Joe had died on the 18th of August, though I had only met him on a couple of occasions, you could sense the kindness and work ethic he possessed, qualities that served him well when dealing with Pinot Noir, which he and his son Tom took to the top of wine world and pushing the category to new levels of quality. The 2016 River Block is the essence of what Rochioli’s DNA is and is a rich and full bodied version, it shows tons of personality and expressive dark fruits with layers of black cherry, plum, raspberry, cranberry and blood orange on the silken palate, all highlighted by deep floral tones, smoky vanilla, cola and sassafras. As this wine opens hints of earth, bacon, blueberry and rose petals flicker in the background, it takes me back to the time I got to experience Anne Gros’ 1990 Richebourg, this is yes a hedonistic and textural wine, but one that has the depth and complexity on Grand Cru level, again, a perfect way to celebrate the life of Joe Rochioli Jr. Rochioli’s lineup, obviously is focused on Pinot Noir, but they also do a fabulous collection of Chardonnays, Sauvignon Blancs and even do a tasty Valdiguie, once called “Napa” Gamay, a very unique wine I always try get, when I visit the tasting room.

The deeply saturated garnet and ruby hued Rochioli River Block Pinot Noir is one of America’s great wines, certainly one of California’s most iconic bottles, never fails to impress and is a very age worthy wine, which this 2016 still being exceptionally youthful and just being to show its full array of flavors and true potential in the glass. As I’ve noted in my many reviews of Rochioli, which started as a estate wine back in 1983, after originally being known as Fenton Acres, when Joe and his son Tom Rochioli, who were second and third generation Italian farmers, became pioneers of Russian River Pinots. Joe, famously, always believed it was the grapes and individual sites that make the best and most intriguing wines here on their historic estate that sits on sloping hillsides on the bench lands above the near by Russian River, which sucks in the cool Pacific Ocean air, and not too far from Healdsburg on the famous Westside Road. The success of these wines at Rochioli are because of, the winery notes, the diverse terroir across their 140 acres under vine, but of course the old River Block is a very distinct site, closest to the river on the southern tip of the property. Tom, at the helm in the cellar here since the later part of the 1980s, and his winemaking team ferment each block separately in traditional fashion using a mainly hands off approach, they, as noted, firmly believe the wine is made in the vineyard and it should not be messed with in the cellar. They are not afraid to employ new toasty French oak in the concentrated in the Cru bottlings, which shows here, but the wine easily comes into balance within a few years of of release. While this is a common practice in Burgundy, and in California in modern times, Rochioli was one of the first premium Pinot Noir houses to employ this a micro-batch hand crafted style of wine, which continues today. The single site wines here at Rochioli are not cheap, but they are well worth the price, especially their prized River Block as this one proved to me.
($129 Est.) 96 Points, grapelive