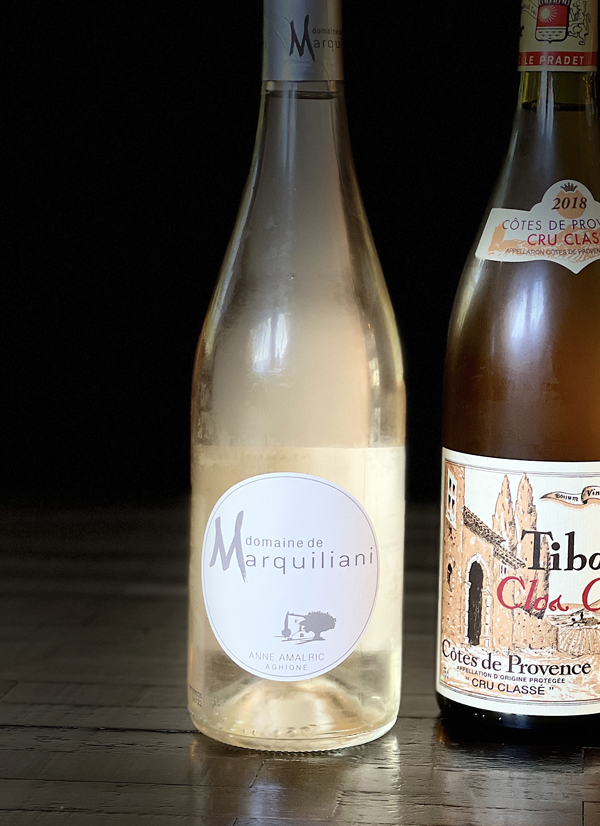 2021 Domaine de Marquiliani – Anne Amalric, Rosé Gris de Marquiliani, Vin de Corse, France.
I am a big fan of Anne Amalric’s Domaine de Marquiliani, who makes some of the most stylish wines on Corsica, with this steely delicately ultra pale vin Rosé Gris ibeing a real favorite, that is made mainly of Sciaccarellu, a local varietal that to be of Etruscan origin and called Mommolo in Tuscany, with a tiny amount of Syrah in the final blend. As I’ve mentioned in the past, this lightly tinted Rosé really stands out for it’s class, vibrancy and clarity, and on an island where there is a huge focus on Rosé, this is among the elite stable of wines along with Abbatucci, Canarelli and Leccia, this is thrilling stuff. It had been awhile since I got a chance to enjoy this wine and it was great to share it with three friends and see the reaction to it, which as expected it was unanimously admired for the crisp refreshing pleasure and it provoked quite a bit of thoughts, especially when compared to opposite array of flavors of an aged Clos Cibonne Tibouren Rosé. The bone dry Rosé Gris de Marquiliani is more mineral driven and stony rather than fruit expressive with muted aromatics and fine layers of ruby citrus, white strawberry, tangy peach and watermelon rind fruits along with rose and lavender water, a hint of wet rock and raw almonds. With lots of energy and zippy acidity this Rosé Gris de Marquiliani makes for a stellar wine to enjoy in Summer and is great as an aperitif or with beach picnics, gaining more personality with air and as it warms in the glass, though staying impeccably balanced throughout.

This bright an intense Rosé Gris de Marquiliani was crafted using exclusively the clear juice after the grapes were cold soaked with 95% Sciaccarellu (Mommolo) and just 5% Syrah, with the wine being fermented in cool stainless steel and not allowed to go through malolactic conversion to promote its dynamic freshness and absolute purity. Domaine de Marquiliani is imported by Kermit Lynch, who dominates the market of top producers and wines from Corsica, and who brought these incredible offerings to an American audience that has fully embraced these distinct and terroir driven wines. Kermit and his team could easily sell two or three times his haul of goodies from Corsica with Domaine des Marquiliani being one his shinning stars. This wine comes from 20 year old vines, set on granite and schist soils near the town of Aghione, that is not far away from the old Roman capital of Corsica, Aleria, on the eastern coast of the island, poetically known as the Costa Serena with mountains that reach over 7,000 feet and seeing some of the coolest climate on the whole island. Kermit Lynch was immediately drawn to Domaine de Marquiliani’s Rosé, saying it was like drinking a cloud, with its heavenly weightlessness being greatly admired. The winery, now run by Anne Amalric, has its roots dating back to the 1950s, as the old estate and vineyards that pre-dated the Amalric family had to be resurrected after it had been completely destroyed by a fire. The Domaine des Marquiliani collection includes just a few wines, but all are exceptional, especially this lovely and invigorating Rosé Gris de Marquiliani, along with a tasty vin Rouge made of 40% Syrah, 40% Sciaccarellu and 20% Grenache, which I highly recommend too.
($32 Est.) 92 Points, grapelive