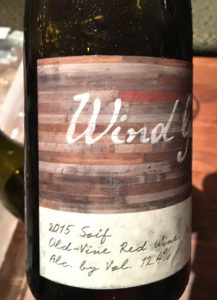 2015 Wind Gap, Soif Red Wine, North Coast.
The 2015 Wind Gap is a creative kitchen sink old vine carbonic red made for pure drinking pleasure with low alcohol at 12.4% and juicy deeply dark grapey joy in the glass! Pax Mahle, known for his amazing Northern Rhone styled Syrah wines, crafts beautiful cool climate wines under the Wind Gap label and like Arnot-Roberts has found success with little known varietals just as much as the classics, he makes a fine set of Pinot Noirs, Grenaches and Syrahs, but also unlikely heros such as Trousseau Gris white and this wine, which is made mostly from old vine Valdiguie, a rare Southwest French grape that used to thought of as Gamay Noir in parts of California. The Soif Red by Pax is about 35% Valdiguie blended with Zinfandel, Carignan, Petite Sirah, Dolcetto, Negromaro and Mourvedre, all from vines planted between 1881 and 1975, all the grapes were fermented very much as Beaujolais and some Rhone wines are with whole berry carbonic maceration giving a forward and fruity wine with light tannins, using cement and neutral cask aged only about 4 months. This delightful and easy to love red jumps from the glass with fresh crushed blackberries, mountain raspberry and farm-stand bing cherries along with tangy sweet and savory spices and herbs, think cinnamon, sage, peppery elements and anise, plus strawberry/blueberry pie fillings. Vibrant and zesty this red begs to be quaffed, slightly chilled, it’s zippy acidity, easy medium body and raw sex appeal make it a mouth-watering treat, it’s super fun and joyous, but don’t sell it short, there’s a real serious quality to be found here, much like the iconic Sean Thackrey Pleiades, this is thrilling stuff, be sure to check out the latest set of Wind Gap offerings, these are some of the coolest wines in California right now!
($29 Est.) 91 Points, grapelive