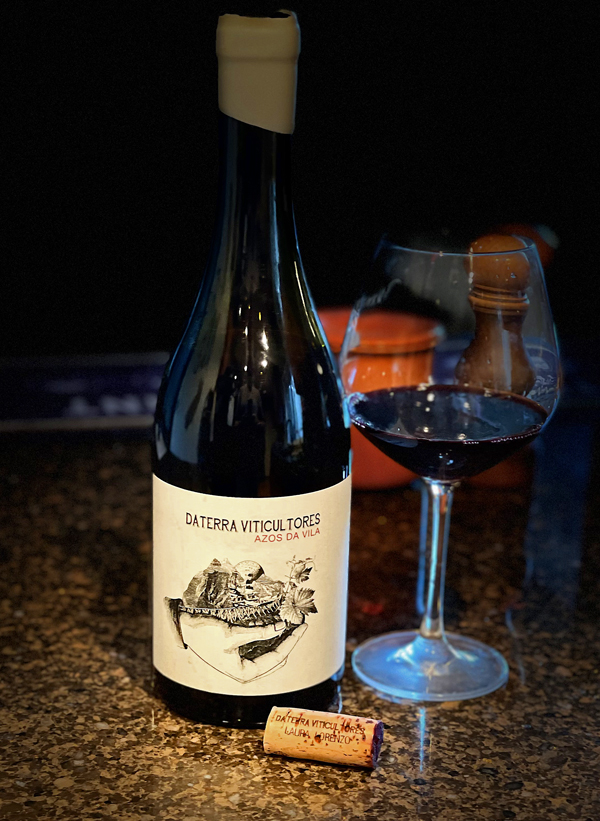 2019 Laura Lorenzo – Daterra Viticultores, Azos de Vila, Vino Tinto de Manzaneda, VdT Val do Bibei, Galicia, Spain.
One of my favorites, Laura Lorenzo’s Daterra Viticultores Azos da Vila red field blend comes from old vines, between 80 and 120 years old, sourced from plots in the Val do Bibei, which is a sub zone of the Ribeira Sacra in Spain’s Galicia region. This cuvée is made from native varietals that are inter-planted on the remote hillsides above the Sil River and it tastes very distinctly of this cool Atlantic influenced region that was first cherished by the Romans. The 2019 is absolutely a thrill to behold with its deep purple/garnet hue inviting you in, along with a floral and spicy bouquet, and a medium bodied palate that is brisk and lively with a pretty layering of blackberry, plum, cherry and blueberry fruits. In the background there is minty herbs, cinnamon, earthy notes and mineral tones that all make this wine complex and intriguing. In the cellar the grapes were partially de-stemmed, with a small bit of whole bunches included and fermented, as Lorenzo notes, using indigenous yeasts in used chestnut and French oak barrels with a two week maceration, after which she then raised the Azos de Vila for 12 months in the same barrels. Her techniques and light touch are to be admired with this Azos da Vila really showing well and it is as pure as can be, I highly recommend these latest Daterra Viticultores offerings, made mainly from Mencia in the reds and Godello, playing a big role in the whites, which come from unique sites in the greater Ribeira Sacra and Valdeorras regions.

Laura Lorenzo, as mentioned here, is one of the Ribeira Sacra’s rockstar winemakers and her wines, like this Azos de Vila are incredible wines that showcase her talents and have a true sense of place. This Azos de Vila, which she calls her Tinto “village cuvée” is a field blend of local varietals, some unknown outside this remote region, including Mouraton, Mencía, Garnacha Tintorera, Merenzao and Gran Negro, that are organically farmed on the almost impossibly steep slopes on a mix of Granite, Gneiss, Clay, Slate and Schiste soils. Lorenzo’s Azos de Vila comes from many Pueblos including the tiny villages of Seoane, Soutipedre, Langullo, San Vicenzo that make up part of Manzaneda, all from plots, as noted above, close to 100 years old. The vines are mainly terraced and are within the Val do Bibei, which is part of the Quiroga-Bibei subzone, where the cool Atlantic influences collide with the warmer continental climate. Lorenzo, who works the vines and guides her wines with all natural and organic methods, got her start at the Ribeira Sacra estate of Dominio do Bibei, helping to put their wines on the world stage, before founding her own label in 2014. Lorenzo also did influential stints internationally and has worked with the iconic Eben Sadie in South Africa at the world famous Sadie Family Winery, plus she also was at Achaval Ferrer in Argentina, both of these experiences had an impact on her wines. These brilliant 2019s from Laura Lorenzo are beautiful wines that benefit greatly by being paired with simple cuisine, with this Azos de Vila going fantastically with meaty dishes, but having the flexibility to play nicely with more delicate foods, these are very rewarding wines to chase down.
($35 Est.) 95 Points, grapelive