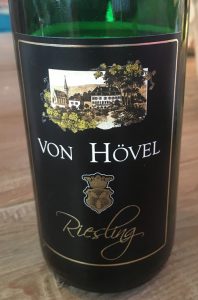 2012  von Hovel, Riesling Kabinett Trocken, Saar Germany.
Since taking over this historic estate in 2010 Max von Kunow has taken von Hovel into a new era with organic farming and a tweaking of the lineup and winemaking with the fruits of those efforts taking form in the 2012 wines, though really taking it to the next level with the monumental 2015 vintage. Though always a winery to follow, it’s recent years look like some of best, I can see a huge difference even with these 2012 offerings, and in particular this brisk and savory toned Kabinett Trocken that saw some skin contact and more gentle fermentation. With it’s greenish light golden hue this Riesling shows plenty of vigor and extract, making it seem almost powerful in intent, certainly it has the class and complexity to be on level with an Erste Lage, or Premier Cru, it’s forceful presence in the glass does make you notice it and it’s an exceptional value if you can find it. That said the 2015 and 2016 should prove even better and the future here looks amazing, highlighting the Saar’s soulful and even earthy elements rather than the vivid slate influences of the middle Mosel not far away, providing a wonderful contrast in terroir characteristics. This 2012 von Hovel Kabinett Trocken estate Riesling (black label) starts with a vibrant array of citrus, spices, white flowers, earthy stones and a zesty steely core leaning on lime, verbena, tart melon and subtle mango. This 2012 is still sizzling with crisp acidity making it feel remarkably youthful, I bet we’ll need a decade to see further evolution and secondary development here, but for the near term it is just a joyful and positive refresher that will go with oysters, smoked/cured meats and perfect for lively summer sipping. It’s charm is it’s inner energy rather than beauty, it gains more complex layers with air, while staying firm and focused, it’s more appealing to those inclined towards austere style wines, while it’s a study in dry extract, it’s not exotic or showy, lingering with it’s racy tangerine, faint rosewater and citron. Herr von Kunow certainly believes the Saar will be the next big thing in Riesling, even claiming that it can produce the world’s greatest Riesling, it’s going to be fascinating to see his progress with von Hovel, so far the results are impressive.
($22 Est.) 90 Points, grapelive