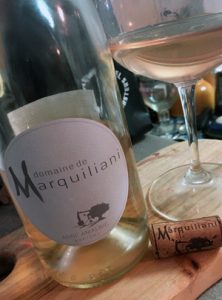 2015 Domaine de Marquiliani-Anne Amalric, Rosé Gris de Marquiliani, Vin de Corse, France.
Anne Amalric’s Domaine de Marquiliani is one of the most stylish wineries on Corsica and this gorgeous and pale Rosé Gris is a delicate, but flavor filled pink made of Sciaccarellu with a tiny amount of Syrah. In year of great Rosé, this really stands out for it’s class and detail, and on an island where there is a huge focus on Rosé this is among the elite stable of wines along with Abbatucci, Canarelli and Leccia, this is thrilling stuff. The 2015, while extremely pale and maybe even lighter in the glass than 2014 is riper and more complex with more texture and length while still retaining it’s main character of mineral intensity, vibrancy and terroir charms. The Rosé Gris de Marquiliani 2015 starts with crisp citrus, white flowers, liquid stones, mild herbs and rosewater leading to a building palate of watermelon, lavender, flint with a hint of distilled peach and white plum notes. Not as flashy as the Domaine Comte Abbatucci offerings, but it doesn’t need or want to be, both sublime in their own way, these are leading the way on high-end pinks on the island, imported by Kermit Lynch, who dominates the wines from Corsica scene and who could sell two or three times his haul of goodies with Domaine des Marquiliani being one of the shinning stars of the portfolio, these wines sell out fast, but to get on them quick. I recently taste a new bottling of Rouge from Marquiliani that was stunning, so look for that as well, it is brand new wine, and it should be at a shop that carries Kermit Lynch wines soon. This bright, vivid and transparent Sciaccarellu based Rosé is ultra cool, bursting with energy and finesse and subtle, it whispers sexy and haunts you with a knowing smile, look for this graceful and lovely wine, drink it over the next half a year or so, sadly there’s never a lot around. Sciaccarellu is to Corsica as Trousseau is to the Jura, a geeky medium weight, spicy red grape that has a mysterious history and glorious future, originally from the Etruscans and still found in parts of Tuscany, where it is known as Mammolo, it has made Corsica and it’s granite/schist soils home and where it is much more notable and expressive, especially in Marquiliani’s and Abbatucci’s wines!
($28 Est.) 92+ Points, grapelive