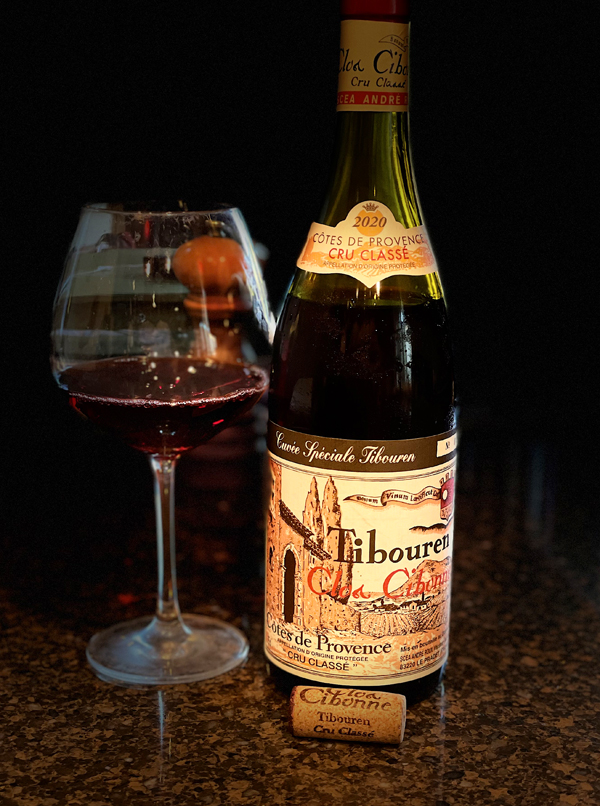 2020 Clos Cibonne, Tibouren “Cuvee Speciale” Rouge, Cru Classe Cotes de Provence AOP, France.
While usually, I just drink up their outstanding Rosé, I am finding that Clos Cibonne’s Cuvee Speciale red is almost as addictive, especially this latest 2020 version, with its ruby hue and complex palate. This Clos Cibonne Rouge, from the Cotes de Provence region, is made with the rare and ancient Tibouren grape, unique in the modern world with its less opaque color, high acidity and earthy quality. These Clos Cibonne wines are some of the coolest and most distinct wines in France, and this Cuvee Speciale Rouge, which a personality of a Jura Trousseau that mated with a Greek Xinomavro, it is a medium bodied wine with firm tannins and vibrant acidity that more often than not shows an almost Nebbiolo like character. This vintage, which has a ruby/garnet hue, is quite rustic, austere and dusty dry with red currant, plum, red berry and burnt orange fruits, along with dried herbs, almost amaro like, leather, anise and chalky stone accents. Clos Cibonne’s André Roux, almost single handed, resurrected the Tibouren in the 1930s when against current fashion planted his estate almost exclusively to Tibouren, instead of the more common imported Grenache and Mourvedre. This Tibouren revival, according to local lore, ignited an era that brought fame for the iconic Rosés of Clos Cibonne, which led to the estate’s inclusion in a 1950’s classification of 18 Cru Classés in Côtes de Provence. André Roux was also instrumental in the creation of the Côtes de Provence appellation in 1973 and responsible for the inclusion of his beloved Tibouren grape into the region’s list of official and accepted grape varieties, as well as allowing it to have that Cru Classe on the label. This Rouge benefits from a good food pairing and air, which brings out more personality, floral detail and length, in fact day two brought some serious extra dimension, making wish I had a few more bottles!.

The Tibouren grape, as I’ve mentioned many times, is believed to be an ancient variety, maybe originally grown in Mesopotamia, that was propagated by the Greeks, though it is odd that it doesn’t look to have survived in their own territory, before being transported by the Romans to Italy, where it found a great home in the Liguria region just south of Genoa and not far from Portofino, where it is known as Rossese and makes some of the most underrated and divine wines in Italy. Clos Cibonne has became synonymous with Tibouren ever since it received special permission from the Provence appellation governing body to list the grape on its labels and as noted, allowed Clos Cibonne in the elite Cru Classe group there. The estate’s vineyards, all farmed organically and set on clay and calcareous soils are located a stones throw from the blue Mediterranean sea, a mere 800 meters from this famous coastline and are surrounded by hillsides that faces the sea, a perfect southern exposure to capture the sun in what is a natural amphitheater. This provides conditions and an air circulation that is perfect getting the Tibouren ripe, but also keeping refreshing acidity and a saline element that adds energy, balance and a vivacious personality. After the Tibouren grapes are harvested, all by hand, they are directly cool pressed and fermented in stainless steel and the grapes were macerated on the skins for just under a week. After which, the Clos Cibonne Cuvee Speciale Rouge saw a short lees aging period, usually this lasts just 4 to 6 months, and as always in used barrels to promote purity of flavors as well as a more savory profile. The Rosé at Clos Cibonne, especially the old vines version is one of the most coveted and complex dry pink wines there is and it can age too, it has to be one of my desert island wines! Every year, I crave more and more of these Clos Cibonne wines, they just hit the spot and provide plenty of mental and physical pleasure, I highly recommend tasting through their lineup.
($35 Est.) 92 Points, grapelive