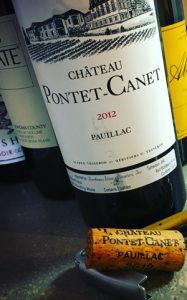 2012 Chateau Pontet-Canet, Pauillac Grand Cru Classe Bordeaux, France.
The Tesseron’s Chateau Pontet-Canet is truly amongst the best wines of the world and unique, since they took over this estate in 1975 the family has led the quality of this Pauillac to it’s greatest heights, and it has always been a wine I’ve admired for it’s sense of place, power and presence. For me the Pontet-Canet 2000 and 2001 might just be the wines of the vintage and were some of my greatest young Bordeaux experiences, especially the 2001, which for me rivaled any of the first growths, and while I love Angelus 2000, the Pontet-Canet blows away the 2000 wines of Mouton and Lafite from the same area! Now, it is harder for me the justify the purchase of Pontet-Canet with the current prices, though when I do splurge this one is near the top of my list, along with Ridge’s Monte Bello and Meo-Camuzet Vosne-Romanee, that said, this 2012 is a remarkable value considering the prices of 2009 and 2010 versions, as the level of quality here in the 2012 is almost to that standard! When you judge this wine against Joseph Phelps Insignia, Opus One, Harlan Estate, Lafite, Latour and or Mouton then this wine from Pontet-Canet really does stands out for the price, and this 2012 offers up everything you’d ever want from a Bordeaux and more with layers of opulence, richness and terroir detail. The Tesseron’s have gone all biodyaminc, are using cement vats or concrete amphorae with clay/dirt that comes from the estate and use less new wood than their neighbors to achieve a pureness and a style that allows their wines to stand out, and it does. The make follows the planted vines, there is about 62% Cabernet Sauvignon, 32% Merlot, 4% Cabernet Franc and 2% Petit Verdot in the blend, though Cabernet Sauvignon is the main thrust and focus and it obviously takes center stage in this wine much in the same way as Chateau Latour, which Chateau Pontet-Canet most resembles in my opinion, though with slightly less smoky oak influence. The 2012 Pontet-Canet is deeply purple with a black core and garnet edges, opaque and dense in the glass, it needs decanting at this stage and I recently tasted from thee separate bottles, all of which performed beyond my expectations, it shows wonderfully integrated black and red fruits, firm, but fine tannin and glorious length and flair. The palate is thick, but divinely graceful with earthy complexity and pumps out blackberry, dark currant, plum and black cherry fruits as well as loamy earth notes, mineral tones, licorice, sweet tobacco leaf and black olive along with a haunting crushed violet and cinnamon spice. There is some bitter coco, smoky vanilla and cedary wood shading, but they really add to the overall pleasure and don’t intrude on the balance and form of this Bordeaux, this is elegant, poised and beautifully crafted stuff, racy, sexy and soulful, it brings back my love of Bordeaux in a rush of hedonism, this full bodied and expressive Pontet-Canet should go for 25 years or more with ease, though can be enjoyed young, best from 2018 to 2032.
($160+) Est.) 94+ Points, grapelive