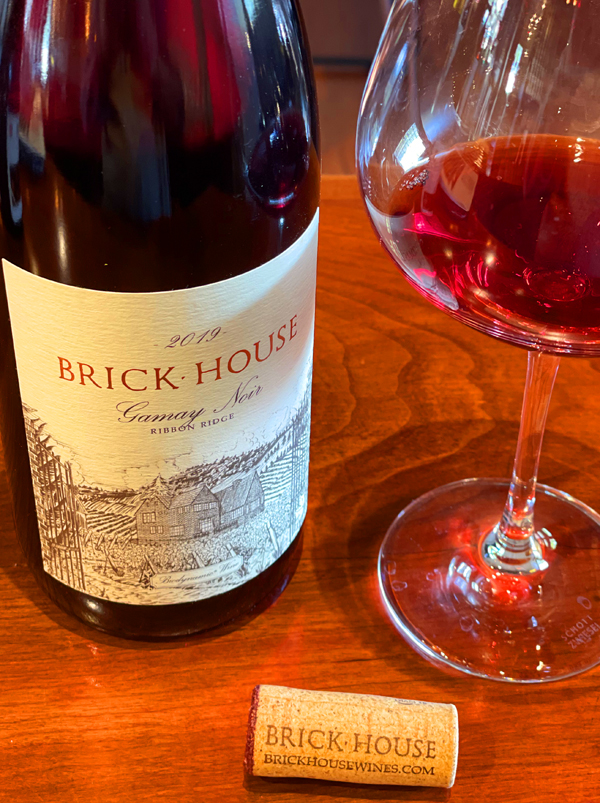 2019 Brick House, Gamay Noir, Ribbon Ridge AVA, Willamette Valley, Oregon.
One of Oregon’s great wineries, Brick House, best known for their classic Pinot Noirs, also does a delicious Gamay, sourced from vines on Willakenzie soils series between 440 and 500 feet in elevation, which gives this wine its fresh and crisp detailing and smooth texture.This year’s Gamay is light and lively with loads of spice and a delicate earthiness, showing bright red fruits, including strawberry, tart plum, cranberry and cherry, along with cinnamon, clove, wilted roses, a touch of cedar and mineral tones.The fruit, as per normal here, was fully de‐stemmed and moved into open top fermenting tanks where a native fermentation was encouraged, as is done with the Pinots. After 21 days, the 2019 vintage Gamay Noir was racked into neutral barrels where it remained until the summer of 2020, which meant it spent 12 months in used 100% French barrels, as the winery explains, then the wine was bottled. This Brick House Gamay is traditionally made and is less exotic and fruit driven than the whole cluster and or carbonic versions, but it is easy to love, has good complexity and is a confident effort in a difficult vintage.

Founder Doug Tunnell, winemaker, of Brick House planted his first estate vines around the old brick house on the property in the spring of 1990 with Pinot Noir first, as the winery notes, then Chardonnay and the Gamay Noir, one of the first true new world sites to have this varietal. Every vine Tunnell planted came with a commitment that was rare in the Willamette Valley at the time, to lead the way for biodynamics in Oregon, Brick House was to be a 100% certified organic farm. Then after years of success and great wines, influenced by the great domaines of Burgundy, in 2005, Tunnell and Brick House achieved full and coveted Demeter Biodynamic certification. The southeast facing slopes on Brick House’s Ribbon Ridge estate, set on ancient marine sediment soils, provides ripe and elegant cool climate fruit to make some of Oregon’s most distinctive wines, such as this lovely Gamay. Tunnell’s Gamay is made from registered Cru Beajolais clones, #282 and #284, these vines date back to 1992 and have been farmed organic since day one. Coming in at about 12% natural alcohol, this ruby/garnet Gamay is highly quaffable and is best with a slight chill, going great with simple cuisine. I enjoy all of Brick House wines and highly recommend them to anyone that hasn’t had a chance to try them.
($32 Est.) 90 Points, grapelive