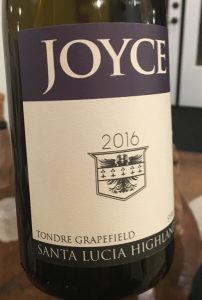 2016 Joyce Vineyards, Syrah, Tondre Grapefield, Santa Lucia Highlands.
The youth movement and generational change in Monterey wines has arrived with a flourish and you should take notice, these young guys are making some amazing wines and changing this region’s fortunes for small producers, this is especially true when you taste the wines of Ian Brand, I. Brand & Family Winery and Russell Joyce of Joyce Vineyards, who’s latest Syrah is one of the best wines of the year! Since around the 2004 vintage, Syrah has very quietly gained a reputation of quality in the Santa Lucia Highlands, the breakthrough wines came from Adam Lee (Siduri & Novy) with his work at Roar and with the Pisoni family offerings at Lucia Vineyards, but sadly these wines were considered a novelty and it took another decade before people started to realize just how great these wines were, but Syrah is now seriously on equal terms with Pinot Noir here! In recent years, Cattleya, Big Basin, Wrath, Roar, Pisoni, Sandlands and others have shown Syrah to be world class from the SLH, and Joyce’s 2016 Tondre Grapefield joins that list, and even better it does so at a ridiculously easy on the wallet price point! While Pinot Noir will certainly remain king of the Santa Lucia Highlands, Syrah will without pretense continue to prove itself worthy without as much fanfare, so it’s a great time to explore this regions expressions, in particular this Joyce Vineyards Tondre Grapefield version, and though 2015 was a fine effort, this new 2016 is a sexy old world style beast with seductive spicy and mineral tones that will easily be misread as Northern Rhone markers, in fact in an amazing lineup of great Syrah wines from around the world, this Joyce 2016 really stood out, I admit I was completely fooled into believing it was an Alain Graillot Crozes-Hermitage or a Andre Parret Saint-Joseph! The 2016 starts with a subtle/youthfully shy bouquet of crushed violets, dusty stones and stemmy spiciness along with a deep purple/black hue in the glass which leads to a medium full palate, with low natural alcohol that feels well below 14%, but with radiantly opulent blue and black fruits, expressing blackberry, boysenberry, blueberry, tangy plum and seductive cassis as well as tapenade, gravel, flinty peppercorns, faint earthy truffle, savory saline (which sets your salivation glands going) and dried minty licorice. Air gets things rocking and rolling adding depth of fruit and highlights this gorgeous wines potential, it will gain dramatically with mid term aging, it was native fermented with 30% or so whole cluster and aged in mostly well seasoned French barriques, of which light vanilla and cedar notes don’t impose on the wine, this is a wine that is pure, almost naked in it’s transparency, allowing it’s truest self and form to show. This is a stunningly brilliant effort from Joyce and team, it should be available soon to taste at their tasting room and on their website, be ready and do not miss it! I’ve been praiseful of what Russell Joyce has been doing and have reported on many of his wines this last year, but these 2016’s take it to a new plane of quality and pleasure, with his dry Riesling, Gabilan Pinot and this Syrah being my favorites, bravo guys, these are absolutely beautiful and truly rewarding wines, drink this Syrah from 2018 to 2025.
($25 Est.) 95 Points, grapelive