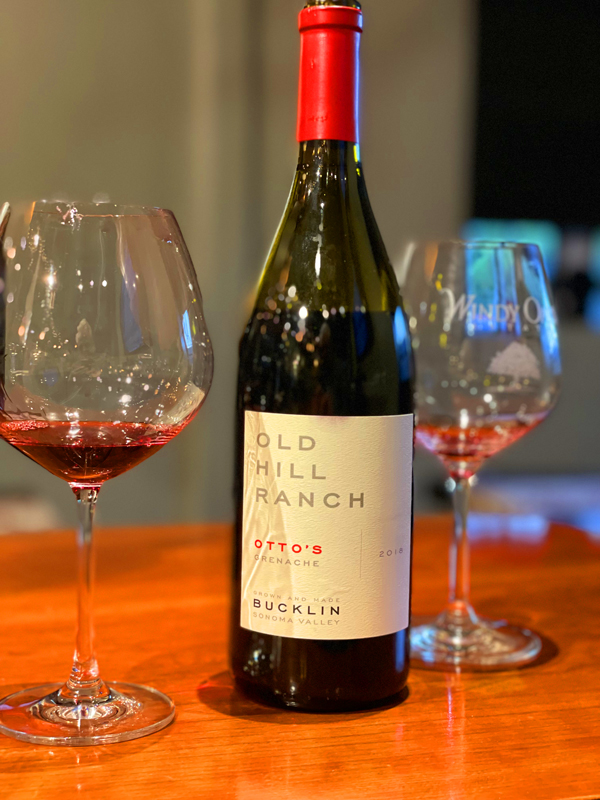 2018 Bucklin, Otto’s Grenache, Old Hill Ranch Vineyard, Sonoma Valley.
Bucklin produces only wines coming from their legendary Heritage family vineyard, the Old Hill Ranch planted in the middle of the 1800s, which is a total of 24 acres, broken up into seven different blocks from which Will Bucklin makes his nine different small lot wines, mainly Zinfandel of course, but also including this more recent Grenache Noir. This dark garnet and ruby 2018 Otto’s Grenache is still fresh and lively, bursting from the glass with expressive aromatic nose and a cool tone to the deep red fruits on display on the full bodied and dense palate, this is a unique and distinctly Californian version of the grape, showing its own sense of Sonoma Valley terroir. This rich and complex Grenache shows loads of black cherry, plum, red currant fruits along with peony, sage, bay leaf, minty herb and sweet strawberry reduction. Beautifully textured and with just the right amount of savory elements, refined tannins and the perfect amount of wood framing, this is excellent stuff. Will Bucklin’s stewardship of Old Hill Ranch, as he says, follows in the footsteps of his stepfather Otto Teller, a renowned conservationist who started farming in Sonoma Valley in the late 1950s. Bucklin adds that Otto was an ardent organic farmer decades before the notion caught hold, especially here in the Sonoma Valley. Going on Bucklin notes that Otto was a disciple of Rachel Carson’s “Silent Spring,” and he refused to use what he called the treadmill of agricultural chemicals on his vines. He believed in dry farming, as Will does, because he knew it produced better wine, with cellar techniques used now, that enhance the sense of place and to compliment the quality of the grapes grown here, which promote transparency and rustic charm naturally. After graduating from UC Davis in 1986, Bucklin interned at Château Lafite Rothschild in Pauillac (Bordeaux) before heading to Oregon to further his learning experience, after which his took over winemaking at Old Hill Ranch for his family’s efforts, turning it into very celebrated and coveted small production winery under his Bucklin label. Bucklin is trying to make his wines in the vineyard and is as hands off as possible in the cellar, as he notes he is very committed to low intervention, he does not add nutrients to the fermentations and only adds sulfur dioxide at very minimal levels to eliminate oxidation.

While known for their ancient vine Zinfandel, Bucklin also does small bottlings of field blended Grenache, like this beautiful Otto’s block planted in 2010, as well as a white and even some Cabernet Sauvignon, and I highly recommend checking them out along with their latest Zin releases. Only about 5 barrels were made of this Otto’s Grenache, coming from one of California’s most historic and oldest heritage sites, Old Hill Ranch, home to the state’s first official planting of Zinfandel, with this wine being a tribute to Otto Teller, who bought this old vineyard in 1980 and who, instead of ripping up the ancient mix of vines, decided to keep it as it is and for which we all can be grateful. The Bucklin’s have preserved the classic old block, as well as planted in the same method, newer parcels like this Otto’s, and the Bambino (young vine) Zinfandel block that sees many other black grapes inter-planted, including Petite Sirah, Alicante Bouschet, Grenache, Mourvedre, Syrah and Carignane. The elder 1880s vines include many others, as Bucklin explains, that through the use of DNA mapping he has documented three very rare varieties that otherwise only exist in the French Alps, most of which are found in the Savoie, Mollard, Persan, and Etraire de la Dui. There is also a small, but an important amount of white grapes too, such as Chardonnay, French Colombard, Chasselas, Muscat of Alexandria and Clairette Blanche that go into his white blend. There is also rarities here, like Aramon, usually only used in Rosé wines in France’s Languedoc, Catawba, Peloursin (one of Petite Sirah’s parent grapes), Charbono (Bonarda), Black Muscat and Tannat, the classic French Basque grape of Irouleguy, scattered throughout the vineyard. Also rumored, but not confirmed by Bucklin’s findings, there may be Merlot, Tempranillo, and Trousseau here as well, and interestingly, Will says, there is a significant amount of an “unknown spotted grape” named for the fact that it has no DNA marker that identifies it or where it might be originally from and the fact that the grapes have spots. I suggest, curious wine and California enthusiasts get on the mailing list to get these limited offerings, in particular their Ancient Heritage Field Blend and this Grenache! The Bucklin wines typically see native yeasts, fermented primarily in stainless steel and then aged a year or so in mainly used barrels, which is why you get to see varietal character and sense place all come together in the wines here. I advise looking for this Otto’s and the very rare Ancient Grenache, along with the Zins here, these are super wines, and authentic California treasures!
($36 Est.) 94 Points, grapelive