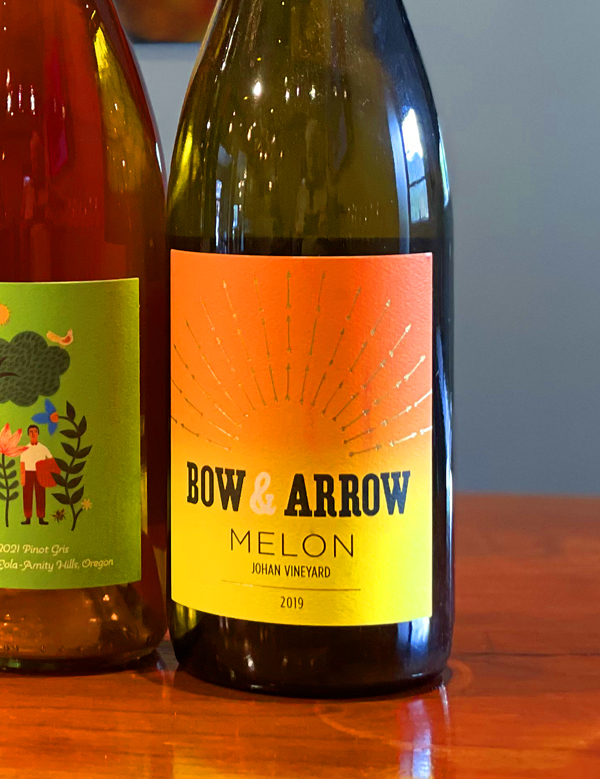 2019 Bow & Arrow, Melon de Bourgogne, Johan Vineyard, Willamette Valley, Oregon.
Back to exploring Oregon, I found this 2019 vintage of Bow & Arrow Melon, which I had tucked away and forgot about, and I was nicely surprised by this dry and leesy white that comes from the organic vines at the Johan Vineyard, it shows a touch of oxidative and evolved elements along with good acidity and crisp layers of lemony citrus, white peach and golden fig fruit along with a touch of wet stones, yeasty notes and mineral tones. The texture has developed too with this 2019 giving some round mouth feel and while still brisk and light framed it has a good expansion and allows this wine some flexibility with cuisine, though I might have drunk it a bit younger with oysters and as it is now I might enjoy it with soft farm cheeses and roast chicken. While Bow & Arrow is known for their Gamay and Pinot bottlings also does a fine series of whites too, with this Melon being one of their favorites along with winemaker Scott Frank’s Sauvignon Blancs and his Chenin. This pale golden wine is certainly a solid effort and those that like Muscat, which are aged as this one was on the lees, will enjoy this wine, especially in its just released form. Scott works with natural techniques in the cellar and his wines have very low SO2 and the wines here are charmingly raw and slightly rustic in personality.

Bow & Arrow, which was founded in 2010, by Scott Frank, is based in Portland and is a Loire Valley and old world “natural” inspired winery that sources grapes from organic vineyard sites throughout the Willamette Valley. They make a set of classics from Sauvignon Blanc, Chenin Blanc, Cabernet Franc and this Melon, as well as some unique rarities and some cool playful quaffers, but with serious intent. I am a longtime fan of Frank’s Bow & Arrow wines, especially his awesome Rhinestones cuvee, also sourced from the Johan Vineyard, that is close to an Oregon version of Cheverny (a Loire Valley appellation) with a blend of Pinot Noir and Gamay. Frank, who spent some time working under the legendary John Paul of Cameron Winery, has taken his own path and has created an underground following of counter culture wine drinkers that are looking for value priced artisan wines. The Johan Vineyard, a certified biodynamic site in Rickreall area of the Willamette Valley, is largest source of fruit for Bow & Arrow, farmed by Dag Sundby and Dan Rinke, who make their wines and provide grapes to some top notch producers, it is set on Helvatia and Santiam soils which were formed by glaciolacustrine deposits over silty loams and clayey alluvium with high acidity and is mineral rich. This is a beautiful site and is influenced by the Chehalem range and the cool nights that gives these wines from here a distinctive (terroir) personality. I recommend checking out the latest set of wines here at Bow & Arrow, especially the 2021s, which have loads of energy and substance.
($25 Est.) 90 Points, grapelive