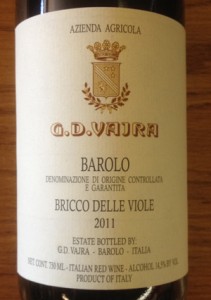 2011 G.D. Vajra, Barolo, Bricco Delle Viole, Piedmonte, Italy.
While everyone wants and covets the 2010 vintage in Barolo, it is these 2011’s that are biggest surprise, in most everyway the match for the 2010’s and much more charming to drink in the nearer term, especially the top Crus from Oddero, Brovia, Boschis, Giovanni Rosso and in particular this gorgeous Bricco Delle Viole Barolo from G.D. Vajra. Sadly I missed Giuseppe Vajra on his last tour through San Francisco, but I did get a chance to taste his amazing new set of wines all of which are lovely efforts. Vajra’s 2011 Barolo Bricco Delle Viole is a powerful expression of Nebbiolo and terroir with beautifully layers fruit, mineral, spice and earth heavenly textured together with refined acidity and velvet coated firm ripe tannins, this is a less brooding wine than than 2010, more like 2008 in my opinion and is one of my top 10 wines of the year, no question. The balance is sublime for a big wine, it comes in at 14.5% alcohol, but still feels poised and doesn’t lack for energy and vitality. Giuseppe Vajra has allowed the hedonistic nature to shine through, while crafting a serious wine of beautiful detail, this Bricco Delle Viole is elegantly sexy and will age with rewarding grace. The nose has a burst of dried roses, cinnamon, tar and dark fruits leading to a full and robust palate of black cherry, damson plum, spiced raspberry, strawberry and tart currant fruits with chalk dust, truffle, salted black licorice, cedar and a hint of iron. This wine fills out with air and has amazing length, this wine pleases in the same way a great Burgundy from a Grand Cru vineyard does, it brings pure emotion and joy, if I had to compare it, I would say it is on terms with Comte Georges de Vogue’s Musigny! This is fantastic Nebbiolo, if you’ve not had Vajra, you should and soon… This 2011 Bricco Delle Viole is a star, it should have another 3 to 5 years in the bottle before final judgement, but I’d say it will go a good 15 to 20 years, best from 2019 to 2028.
($90 Est.) 96 Points, grapelive