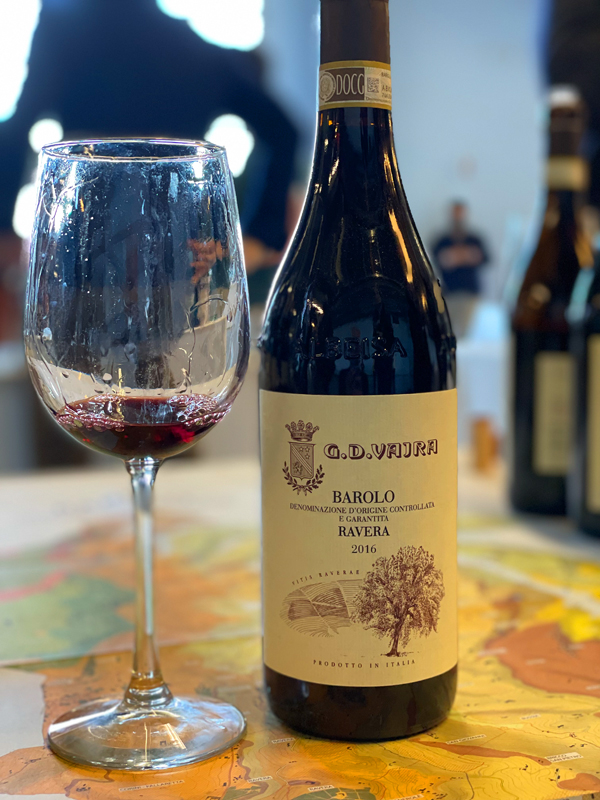 2016 G.D. Vajra, Barolo DOCG, Ravera, Piedmonte, Italy.
I recently attended the fabulous Slow Wine tasting in San Francisco, an event that highlights small sustainable and organic producers and always is filled with authentic and thrillingly honest wines with this year’s being no exception, but there was one wine that stood head and shoulders above the rest, it was no surprise though it was made by Giuseppe Vajra. His family’s wines have always stood out and speak me, it was even with these high expectations that I was blown away with this 2016 Ravera Barolo! The G.D. Vajra Barolo Ravera Cru starts with a chorus of angels singing a heavenly tune and your senses weep in gratitude for what they are experiencing, well it seemed that way at the time, but seriously this is near divinely perfect and a wine of chiseled feminine beauty. This 2016 Ravera is perfumed with dark blossoms and a mix black and red fruits, spice, earth, along with hints of game, ceps and minty herbs. The texturally sensual Ravera is powerful, but the ripe tannin is silken, a hallmark of this exceptional wine past and present. Layers seamlessly guide by with accents of dried roses, distilled violet, lavender oil, tar, salted black licorice, stony mineral, cedar all playing supporting roles to a core palate of black cherry, damson plum, balsamic strawberry and tangy currant fruits. Everything is a heightened thrill and exciting with a burst of natural acidity providing a lift and the length here is extraordinary, even by Vajra’s standards this is next level stuff and it never takes the foot of the gas. The vinification was carried in Vajra’s custom-designed vertical tini, with gentle punch downs and pump-overs during the maceration and primary fermentation of the carefully hand sorted berries. This lengthy start goes for close to 60 days, including a submerged cap, for complete extraction. After which, the winery notes, spontaneous malolactic fermentation took place in Spring and the wine was racked to large Slavonian casks of 25 and 50hL sizes where it matured for two years before bottling.

In 2016, when I tried Vajra’s 2012 cru Barolo(s), I said, Giuseppe Vajra’s work with these these vineyards, Bricco delle Viole and Ravera was something truly magical, and today I feel the same. These are thrilling wines and true expressions of place, and in particular I loved this Ravera, claiming then as now, it is as good as Nebbiolo gets and then some! It is worth noting that all of Vajra’s top Crus, this one, the newer Coste di Rose and his signature Bricco delle Viole are gorgeous wines. I thought at that time, that in bottle the Bricco delle Viole might just surpass the 2012 Ravera, but this time I think the 2016 Ravera could be the wine of the vintage, it’s heavenly deep, layered and hauntingly beautiful wine, like in the 2012 version, it has Burgundy like elegance and if you were comparing to a Grand Cru Burgundy, and I did and will, for all the right reasons, you’d say Ravera was a bit more Chambertin, think the iconic Armand Rousseau, while the Vajra Bricco delle Viole is no slouch either, which I have likened to Musigny in the past! Giuseppe Vajra himself explains Ravera this way “I am intrigued by Ravera’s indomitable personality. It is crisp like the sound of a Telecaster, straight and electric.” Going on, he points out that Ravera is the most important single vineyard in Comune di Novello and it’s on a very complex soils, including marls of Tortonian origin mix with sandstones and clays of the Serravallian period, that contributes to the depth and serious nature of this wine. Vajra’s parcels at Revera are located in the most southern amphitheater, getting good exposure and even ripening and up at between 320 and 340 meters to get a cooling influence that allows for the amazing balance you find in the wines. It is also important to remember, in 1971, Aldo Vajra, Giuseppe’s dad, then still a university student, was one of the earliest to adopt organic farming in Piemonte, something the Vajra’s are proudly continuing with all their vines being sustainable and organic certified, and they pay respect to traditions as they do to nature in their wines. Nebbiolo lovers are going to want this wine, I can already tell you that this 2016 Ravera is going to be in my top wines of the year, I highly recommend grabbing it while you can.
($90 Est.) 98 Points, grapelive