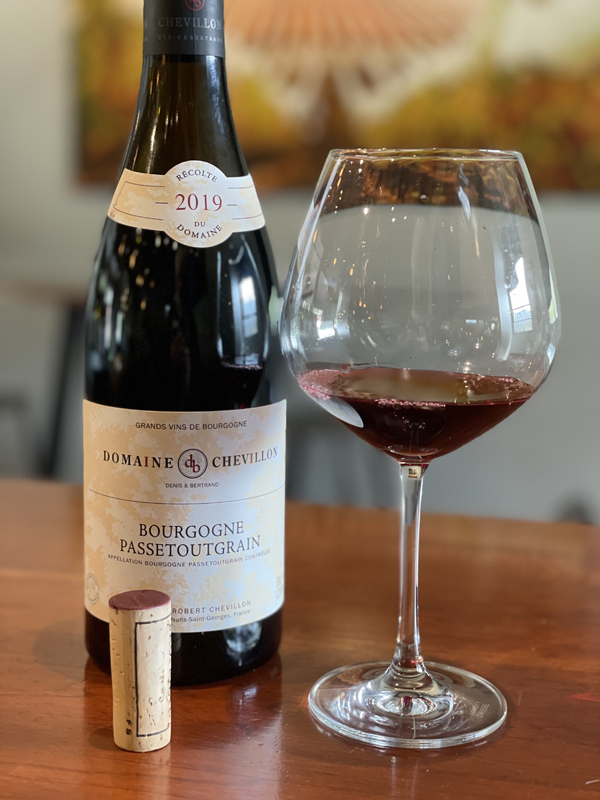 2019 Domaine Chevillon, Bourgogne Passetoutgrain, Nuits-Saint-Georges, Burgundy, France.
I have become a huge fan and a buyer of Passetoutgrain wines in recent years and a Gamay enthusiast, so it was with great joy I found this bottle of Domaine Chevillon, it did not disappoint either with real Chevillon character and earthy depth on the complex palate that shows dark cherry, currant and huckleberry fruits, hints of leather, anise, cedar and woody mushroom notes. There’s more to come with air, adding dried violets, minty herbs and tree picked plum, black tea and crushed stones. This delicious and rare Chevillon Passetoutgrain, which is as the winery notes 1/3 Pinot Noir and 2/3s Gamay Noir, comes from grapes sourced from three lieux-dits parcels with vines close to 45 years old or more, located very close to the village of Nuits-Saint-Georges itself, including Champs d’Argent, Croix Blanche and Petit Chaliot, which are set on sandy clay and limestone soils. I love the intensity, the high toned acidity in this 2019 and the raw, a touch reductive, style here as well as the long persistent finish, this is not far off the quality of their hugely more famous and expensive 100% Pinot Noir bottlings, especially for those that know the house style here and or love old school Burgundies, like those of Domaine Maume. Though obviously there is Gamay dominant profile that clearly shines through in the mouth, with the Pinot adding complexity, savory tones and a silky feel to this outstanding example of Passetoutgrain. While the 2019 vintage proved difficult and produced tiny yields, this wine, with its dark garnet and ruby color in the glass, is a success with a taut structure and good fruit concentration, making it more than an afterthought or light quaffer, this can age a few years at least and is sublime with hearty cuisine.The primary fermentation for the Passetoutgrain was in stainless steel cuves, 100% de-stemmed, and then wines, after a long cool maceration are racked into barrels, 20% new, and aged 16 months.

The Domaine Chevillon, once known as Domaine Robert Chevillon, is run by the two Chevillon brothers, Bertrand and Denis, who have one of the single greatest collections of Premier Cru old vine parcels in Nuits-Saint-George, rivaled only by maybe another favorite of mine, Domaine Henri Guoges, including Les Cailles, Les Chaignots, Les Vaucrains, always a superstar in my book, Les Perrières, Les Pruliers, Les Roncières, a real quality sleeper, Les Bousselots and their own little slice of the historic and coveted Les Saint-Georges, which could easily be a Grand Cru! Importer, Kermit Lynch says, Chevillon’s Passetoutgrain, a blend of Pinot and Gamay, is a worthy introduction (to the estate and to this unique blend) and their rare (two barrels made) Nuits-Saint-Georges Blanc made from the “Pinot Gouges” (a mutation of Pinot Noir or as I call it albino Pinot Noir) is an exotic treasure, with Kermit adding, that ages just as long as the domaine’s fabled reds. It seems incredible that Nuits-Saint-Georges hasn’t been awarded some Grand Crus, even Kermit is astonished, noting himself that the top-tier Chevillon premier crus are indeed worthy, explaining Nuits-Saint-Georges does not officially have any grand cru vineyards, but he’s convinced that Cailles, Vaucrains and Les Saint-Georges are firmly grand cru quality, which as mentioned I agree completely, though I’d add a few more. Denis and Bertrand Chevillon are now Burgundy elites, taking the legendary work of their dad to the next level since I’ve been drinking these domaine’s wines. Having personally sold these wines and pouring them at special tastings, I have become a huge admirer of Chevillon, even their lowly Bourgogne Rouge and village level Suits-Saint-Georges are absolute stellar bottles, in fact they are made the same way as the Premier Crus and have long drinking windows, I used to do my best to get those value bottlings for myself and they remain go to wines. It is hard to secure all of these Chevys, and in particular their Passetoutgrain and Aligoté, but it is a rewarding pursuit!
($44 Est.) 92 Points, grapelive