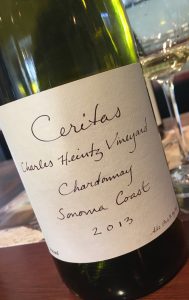 2013 Ceritas, Chardonnay, Charles Heintz Vineyard, Sonoma Coast.
Ceritas, the husband and wife duo of John Raytek and Phoebe Bass are a tiny mailing list only winery crafting amazing Pinot Noir and Chardonnay from selected cool sites in California’s north coast and Santa Cruz Mountains, (Ceritas also does a tiny amount of Cabernet Sauvignon, though I’ve not been able to try it yet) with John Raytek (Formerly of cult producer Rhys) crafting these small lot wines. Ceritas, like Aubert, Failla and Arnot-Roberts, goes for terroir expression and makes lovely vineyard designated wines, and Raytek’s light touch in the cellar highlights delicacy and lively accents, this being especially true here in this beautiful and vivid Charles Heintz Vineyard 2013 Chardonnay, it’s really an impressive effort with crisp detail and lightness of layering, while still having personality and palate impact. The first impression is one of briskness, white flowers and mixed citrus with hints of marmalade and vital spices, mineral and wet river rocks, though it gains a bit of weight with air and texturally it flows with a certain Chardonnay purity and creaminess, it was masterfully judged, at 13.6%, and the sweetness of the French oak is subtle and adds to the whole experience. Fine apple, pear and white peach fruits along with a touch of hazelnut, key-lime, minty herb, vanilla and lemon zest round out the whole making for an energy filled and delightful wine that adds a hint of chalk and quince the longer it’s in the glass. Vigorous and thought provoking this Ceritas is a class act, I have without a doubt enjoyed their Chardonnay as much as any in California, and while this one stands out, I also really recommend their Richard Alfaro farmed Trout Gulch Vineyard, Santa Cruz Mountains bottling, it is a crisper and earthier style, in the more Burgundy paradigm, these are awesome wines.
($60 Est.) 94 Points, grapelive