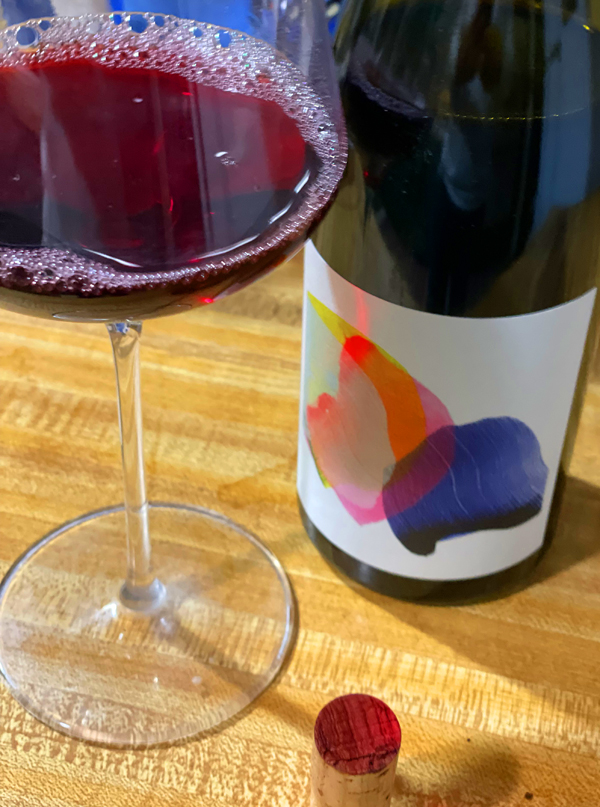 2019 Jolie-Laide, Grenache/Syrah/Mourvedre/Viognier, Shake Ridge Vineyard, Amador County, Sierra Foothills.
The gorgeous 2019 Sierra Foothills Rhone style blend from Scott Schultz and his personal Jolie-Laide label is pure and transparent with a classic Gigondas or Vacqueyras feel and profile with a Grenache led full bodied palate of crushed mixed berries, including boysenberry, plum, pomegranate and a touch of blueberry compote, along with graphite, earth, anise, mocha, peony florals and lingering kirsch. At Jolie-Laide, most all the grapes were all crushed by foot trodding and fermented 100% whole cluster, with nothing more than gentle punch-downs throughout and indigenous yeasts, with aging be done in used French oak barrels, all to allow the great terroir, like here in this GSMV, to shine through. Shake Ridge Ranch Vineyard is an epic site and is farmed by the Ann Kraemer, a pioneering legend in the Sierra Foothills, who has been a consulting viticulturalist for Domaine Chandon, Swanson, Cain, Calera, Paul Hobbs, and Shafer, to name a few. The Shake Ridge Vineyard is set on geological wonderland of soils with schist, Mariposa slate, greenstone, and marble, plus the are big chunks of quartz that litter the ground. The Sierra Foothills has a warm climate, but here at this elevation it sees a huge day to night swing with the vines getting a nice cool rest during the dark hours, helping them retain natural acidity, which is evident here is this vintage and the natural alcohol is low, remarkably just 13.2% in such a concentrated and densely packed wine.

Jolie-Laide is Scott Schultz’s one-man operation based in a Sebastopol and while having gained a reputation for geeky cool wines in recent years, his Syrah is nothing but old school traditional and with loads of class and distinction with a clean and transparent profile. As mentioned in my prior reviews, Scott moved to Napa from Chicago in 2007 with mostly fine dinning experience in the restaurant business on his resume which led him into a position at famous chef Thomas Keller’s Bouchon Bistro in Napa’s Yountville, where he became head of their wine program and fell in love with California wines. He worked with Arnot-Roberts and Ryme Cellars, two modern new generation wineries, before joining Pax Mahle at Windgap and Pax Wine Cellars, where his talents have helped produce some of California’s best loved Syrahs. I must say this Grenache, Syrah, Mourvedre and a small amount of co-fermented Viognier is really drinking fantastic right now, but is still beautifully fresh and vivid, giving me the impression that it will age another 5 to 10 years, it is easy to love, though very serious too. Earlier this year I enjoyed Schultz’s Gamay Rosé and his delicious Melon de Bourgogne white, each wine in the Jolie-Laide lineup highlights a sense of place. I was a little late getting into these wines and I am thrilled by what I’ve tried, making me happy I joined the mailing list. The Jolie-Laide wines just keep getting better and better, with the lineup expanding to include some outstanding stuff, in particular I recommend their red wine offerings, this dark colored and well balanced Shake Ridge Grenache/Syrah/Mourvedre and Viognier for sure, plus his Gamay, the Jura inspired blend, the Freisa, and the Syrahs.
($38 Est.) 94 Points, grapelive