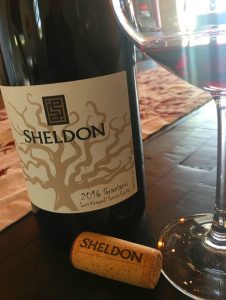 2016 Sheldon Wines, Graciano, Luc’s Vineyard, Fountaingrove AVA, Sonoma County.
Seriously old school and remarkably vivid in palate impact the wonderful delicate Sheldon Graciano, maybe California’s most secret and rare wine, is a 12 case production red that is translucent ruby nectar in the glass, it’s a joyously light wine that has incredibly fine detail, energy and inner beauty. For years Dylan and Tobe Sheldon have been exploring Graciano, an ancient and obscure varietal, found in Rioja mostly, but it is also known as Tintilla and grown as far away as the Canary Islands and in the flaky white soils of the Sherry region in Jerez, and some experts believe it is related to the Jura’s Trousseau, regardless the Sheldon’s have made it their secret signature offering and it has a cult like following, it impresses not for it’s density, but for it’s intricacy. Only a half barrel’s worth was crafted from a tiny home vineyard, Luc’s in the new Fountaingrove AVA near Santa Rosa in Sonoma County, an area that was extremely affected by the recent fires, thankfully Luc’s was spared, the Sheldon’s also source Tempranillo from here too, making a Brut Rose sparkler and a no malo red from it, as well as a bit of Syrah that I have reviewed. The 2016 Graciano Luc’s vineyard is bright and with a hint of straw and earth to go along with delightfully crisp red fruits, spice and mineral notes, the Sheldon’s, husband Dylan and wife Tobe, ferment native and do a gentile basket press with only seasoned French oak barrels employed, with this wine that natural touch comes through with ripe fresh flavors, but with only 11.7% alcohol, again highlighting the delicate detailing here, it flows cooly across the palate with tangy red cherry, briar laced raspberry, strawberry and lifted cranberry/currant notes as well as cut hay, black licorice, minty herb, cinnamon and dried flowers. This vintage has the personality and acidity the winemaker finds irresistible and you can see why, this is awesomely fun and out of place in the new world, some Dylan especially revels in, making it one of the most interesting 7%er(s) in California joining Pax Male’s Wind Gap Trousseau Gris, Arnot-Roberts’ Trousseau Noir and even Randall Grahm’s Bonny Doon Basque-ette Case with also has Graciano in it!
($36 Est.) 93 Points, grapelive