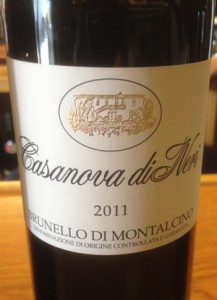 2011 Casanova di Neri, White Label, Brunello di Montalcino DOCG, Tuscan Red, Italy.
It was a pleasure to meet Giavanni Neri and taste through the latest Casanova di Neri wines, Casanova di Neri is one of Italy’s great wineries and a blue chip standard Brunello year after year. The new set of Casanova di Neri is an amazing lineup from the humble Rosso di Neri to the mind-blowing perfection of the 2010 Cerretalto Brunello! Of course, I was most interested in the soon to be released 2011 Brunello offerings, and how they’d compare to the 2010’s, so I picked the classic White Label to focus on, though I did try the 2011 Tenuta Nuova with Giavanni as well and while not as firm or as focused as the 2010’s these 2011 wines are highly enjoyable and wonderfully expressive and impressive. Similar to 2011 Barolo, these wines gained from the warmer summer heat, these are more generous wines with sweeter tannins and will be easy to please in their youth, but Casanova di Neri really did a great job here, as these Sangiovese Grosso Brunello di Montalcino 2011’s both have balance, depth and vitality. The 2011 Casanova di Neri White Label, the Brunello Normale, is full of flavor, extract and energy with ripe fruit, structure to match and pleasing mouth feel. The 2010 Cerretalto Brunello by di Neri and the 2011 Tenuta Nuova are absolutely stunning wines, but both learn towards Bordeaux in style, and in price, especially the Cerretalto at $375/bt is in league with the great Paulliacs, with the Tenuta Nuova being more Right Bank in style, while the 2011 Casanova di Neri White Label shows more it’s Tuscan soul. The 2011 White Label Brunello di Montalcino starts with a touch of graphite/flint, red raspberry, sweet minty herbs, light floral tones and cigar wrapper leading to a full and round palate of blackberry, cherry, spiced plum and wild strawberry fruits along with cedar, black fig, anise and warm stones. The body is lavishly textured, but there is lift and vigor with just enough acidity and fine tannin to framed this spot on Brunello. This will be a sleeper, while most people will chase the top end wines and or keep tracking down 2010’s, this looks set to be a great wine that might get overlooked, that will be a mistake, this is one to have and drink over the next decade, it’s very nice stuff. The 2011’s should be widely available in March, be sure to keep an eye out for these Casanova di Neri’s, and if you like Tuscan reds, then you’ll love the stylish flare of di Neri!
($63 Est.) 93+ Points, grapelive