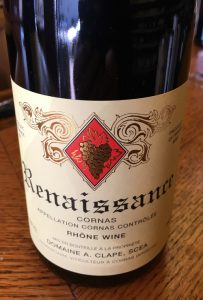 2014 Auguste Clape, Cornas “Renaissance” Rhone Red, France.
From younger vines the Renaissance cute is a slightly below the flagship Cornas at Clape, but this 2014 I think is almost as good, in fact because it was a more difficult year than let’s say 2013 and with the extra attention and the delicacy of the vintage the 2014 Renaissance Cornas might be drinking it’s best ever versus the top cuvee. This 2014 is classic northern Rhone Syrah, pure and earthy with layers of spice, game, blue fruits, floral notes and sappy herbs. The Clape parcels are some of the finest in the region, mature vines on slopes of granite, three generations of Clape’s, Auguste, who was the first to bottle his own wine in Cornas, along with his son Pierre-Marie and grandson Olivier, run this tiny cellar and estate, the vinification is old school, all whole cluster with stems, native ferments in cement cuves and extended elevage in old large foudres. Everything is by hand and long hours of hard work in the vines to allow extra hang time so the stem inclusion is ripe and not green(y) tannic, the 2014’s were (are) a bit less chewy than the 2013 and 2010’s were (are) and show wonderful finesse and poise, while still having the rustic character and charm of classic Clape(s) Cornas, I personally adore 2014 Northern Rhones, the lightness and perfumes are heavenly and more feline in style and this Domaine A. Clape Cornas Renaissance is gloriously alive and intense with a palate of blueberry, boysenberry, damson plum and kirsch along with background complexities that include violets, cinnamon, celery seed, saline, black licorice, flinty/embers, olive paste, leather/meat, iron and lingering cassis. There’s plenty of body and richness to fill out in the mouth, as well as a cut of acidity and firm tannin holding this beautiful and purple/garnet Syrah in place, this is serious stuff and wildly pleasing for us Syrah enthusiasts, there’s no doubt that Clape is one of the best producers and deserve great credit, though I’d have most likely rated it a few points higher if not for the slightly pricy nature of this bottling, especially with the exchange rate in our favor at the moment, but it’s really good. Best from 2018 to 2026.
($90 Est.) 92+ Points, grapelive