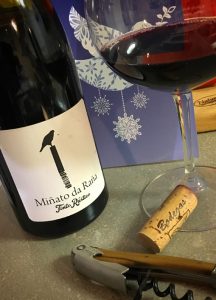 2014 Bodegas Nanclares y Prieto, Minato da Rana, Tinto Rustico Vino de Mesa, Galicia Spain.
The Nanclares red, a wonderful field blend of mosty Mencia 60%, but with 30% Garnacha and 10% other native grapes from a single south facing vineyard of 100+ year old vines on the Minho river in the Ribeira Sacra. The vines tended by Roberto Regal are all organic and is a cooler site set on granite and loose rocky alluvial soils at 600 meters above sea level, these steep slopes have been producing some of Europe’s most intriguing red wines since Roman times and is a place very much influenced by the near by Atlantic, and I’ve wanted to try this limited cuvee since I noticed Silvia Prieto and Alberto Nanclares foot stopping red grapes on social media! You see Nanclares is in Rias Baixas and they make some of the world finest Albarino, so finding out they were crafting this 46 case production red was a thrill to discover after falling in love with their gorgeous Albarino(s) a few years back, Farm Wine and Jose Pastor Selections import their wines, but obviously there is very little to go around, I am grateful to Alex Finberg of Farm Wines for sending me a bottle from New York, as all the California allocation (18 bottles!) had been spoken for, it made for a fantastic New Year’s present, as the wine more that lived up to my huge expectations. The 2014 vintage was difficult, making what Prieto and Nanclares lovingly crafted even more rewarding and it shows in this aromatic, earthy and spicy red, it has a beautiful open palate of crushed violets blue fruits, flinty/iron mineral spice, cinnamon stick, cracked peppercorn and stylish minty/anise herb notes to go with vibrant acidity, silky tannins and dreamy texture. Plum, wild berry, tangy cherry and tart currant fruits unfold in the mouth kept in check by savory tones, saline/brine and stony details with lingering sticky lavender, earth and hints of olive. This is really great wine, and I cannot wait for the up coming 2015 version, hopefully there will be a little more to get, it was made in a traditional old school natural style with native ferments in neutral cask and raised after a month long maceration in a solo French used 500L barrel, with low sulfur and without racking, this pretty and dark unfined and unfiltered red should age well too, but so good now! While this Nanclares y Prieto Mencia based Minato da Rana Ribeira Sacra will be a tough get, don’t miss their amazing Albarino, these kinds of wines show why Galicia is with no doubt one of the most exciting growing regions on the planet, especially in recent vintages!
($60 Est.) 94 Points, grapelive