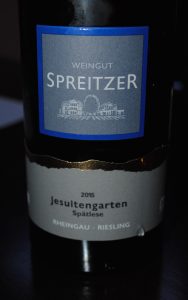 2015 Weingut Spreitzer, Riesling Spatlese, Winkeler Jesuitengarten, Rheingau Germany.
Another wine I tried on my visit to Spreitzer, and the Rheingau in October of 2016, was this amazing Spatlese from the thrilling 2015 vintage, the Jesuitengarten Spatlese from a Grosses Lage and historic vineyard in the Winkeler district is a wonderfully textured and lavish white, that while sweet it has tremendous vitality and balance with a forceful and flamboyant personality. This is not a wine to fear it’s sweetness at all, it pleases and seduces complexly with a lush creaminess of texture and is lifted by extract and energy making it a great expression of upper Rheingau Riesling and a stand out for the classic Spatlese category, even without the slate impact you’d see from the Mosel, this wine shows leesy intensity and richness of detail with heighten perfume, elegant form and lingering fruity essences. The Spreitzer 2015’s should not be missed, especially the Trockens, including the amazing GG’s, but also the Kabinett, Feinherb and the Spatlese, like the signature “303” (Speitzer’s most prized sweet offering) as well as this more delicately nuanced example. Grown on sandy loam, loess and gravel the Jesuitengarten also gets unique conditions from the near by Rhein, here is where it is at it’s widest point and it creates a lake effect almost here and so the climate allows for early ripening and complete development of flavors, there is a special terroir element here, and to this spectacular former Church vineyard, that is now a prized Spreitzer monopole, their fermentations are now mostly native and in a combination of stainless and German 1200L oak casks “stuckfass” which adds to the depth, gracefulness and layering of the Spreitzer Rieslings. A sleeper in the great set of offerings from one of the regions oldest wineries, founded back in 1641, the 2015 Jesuitengarten Spatlese is a profound monument to this style of wine with a deep fruincet core and lacy acidity showing apple, lemon/lime, sweet peach/apricot fleshiness and exotic tropical notes along with an inner rosewater and jasmine perfume that you can taste and feel, not just smell, along with a fine density that never feels heavy, this is a Riesling that carries it’s sugar with pride without being cloying or vulgar, this is remarkable and posed wine that begs for another 15 to 20 years in bottle, it will certainly become legendary in time, but still thrills even now and should not be missed. Layers of mineral, wet stones, subtle brioche and spice add to the overall focus here with a touch of hedonistic sexiness of vintage making it’s presence know, but in a refined and stylishly less overt way, best to enjoy this fabulous Riesling with Asian fusion cuisine, or smoked speck, something briny/savory or almost anything with big flavors that will not clash with the complexity and sweetness in the wine. I could not hide a huge smile when Andreas Spreitzer poured this one for me at the Spreitzer tasting, and Andreas gave me a knowing smile in return, enough said, this is special Riesling that should not be overlooked!
($32 Est.) 94 Points, grapelive