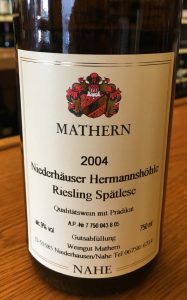 2004 Weingut Mathern, Riesling Spatlese, Niederhauser Hermannshole, Nahe Germany.
Wow, what a treat this 2004 Spatlese by Mathern is, this vintage never gets old tasting and almost always over performs considering the never hyped growing conditions or media buzz, and recently I have tried some spectacular from this year, including Kruger-Rumpf and now this one, from a winery I have almost no experience with, even though it has been part of the Terry Theise portfolio and I missed when I visited the Nahe in October. Mother shares some of greatest vineyard space as the famed Donnhoff, and this Mathern Spatlese comes from Niederhauser Hermannshole, yes that Hermannshole, that wondrous site on the Nahe that everyone should speak of in the same sacred way they do about Le Montrachet or Corton-Charlemagne, this is a holy site for white wine in the same way. Okay, Mathern is not Donnhoff and comparing would not be right or fair, but this is a lovely mature Riesling of pedigree and class, showing a grey slate influenced palate and true/pure terroir character, it’s a classic old school Spatlese with exotic tropical flair and lively form that makes for a compelling example of off dry, don’t fear the sweetness, Riesling with just the right amount of sexy mouth feel and low toned acidity to charm and almost thrill you. Why have Spatlese and Auslese become dirty words in modern times is beyond me, they are gifts from God or nature if you like and joyous to experience, people need to get over it, and that is coming from a dry Riesling freak, especially when it comes to aged Riesling, you’ll be so rewarded if you stash away Spatlese and Auslese, and for what pleasure you receive they are some of the greatest bargains in the wine world… Enough preaching, either you get it or you are too stupid to convince, sort of like do you see beauty in the world or just dollar signs, and it’s okay if you are not into Riesling dry or sweet, that’s fine, but these are still some of the best wines in the world. The Mathern 2004 is very expressive and bursts from the glass instantly with floral and the mentioned tropical essences leading the way with a hint of honey and flinty spice, it’s slightly orange tinged golden hue makes you think thick and dense, while the palate feels alive and bright getting fresher with every sip. Pretty rose petal, honeydew and baked apricot unfold in this Spatlese with touches of white fig, a cherry note and wet stones as well as salted caramel, mango and lychee. This is simply a lovely and refined semi sweet wine that can be enjoyed purely on it’s own, easy to understand and with graceful richness/lush textures, but stylish enough to be not cloy, finishing with clarity of purpose and with enough brightness to hold your interest, drink now.
($35 Est.) 92 Points, grapelive