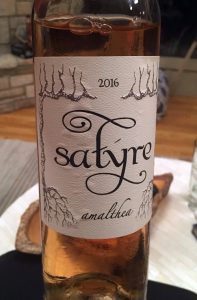 2016 Satyre Wines, Amalthea Rosé, Russian River Valley.
The face of Satyre Wines, Nicole Kosta, a fiercely proud Aussie, was an organic chemistry graduate of the University of Adelaide before coming to the US to pursue a science career, before being bit by the wine bug and going down the Sommelier route. She being mentored by by the first US female Master Sommelier, Madeline Triffon, later becoming the wine director of the esteemed Mandarin Oriental Hotel in San Francisco, where I first became where of her, she was well known figure and talent in the Somm and wine tasting scene in the City. Along, with her partner in wine, winemaker Ted Weisser, an Alabama native that followed his wine dreams to California in 2011, she started their own label Satyre Wines. It was after leaving the Mandarin and looking for the less stressful wine country lifestyle she joined Dan Goldfield and Steve Dutton at Dutton-Goldfield Winery using her skills in wine education, hospitality, direct to consumer sales and business development. Satyre, pron. {suh – tîr}, is all about small lot wines, the name Satyre, as explained by Nicole, comes from the mythical woodland creature the Satyr, half human & half goat, who indulged in the great vice’s of the world, namely and mostly in wine, as well as dancing and music, they were also companions to Dionysis, the God of Wine. They first did a Pinot Noir, and while that remains a focus of Satyre, especially being where they are, they added a Los Carneros Vermentino, a Chardonnay, and more recently a Mourvedre from Yolo County, but maybe most interesting is this Rosé, which is a unique wine, and one that sets this young label apart. The Satyre 2016 Amalthea Rosé is crafted from mostly Pinot Noir, Rolle (The French term for Vermentino) and a dash of Mourvedre, it’s an intriguing Rosé varietally, but also because it’s barrel fermented and barrel aged for 22 months sur lie in cask, with 10% new French oak. Satyre was going for some added complexity and mouthfeel, which they very much succeeded in. While in the cellar it was treated more like a Chardonnay with lees stirring twice a month that adds to this Rosé’s glycerin and gives rich texture, which somehow retains a fresh intensity and life in the glass. Helped out by ex-Merry Edwards hand, Jeff Restel, their consultant, who is now winemaker at Dutton-Goldfield, looks to have had a good influence on the lineup, especially the Pinot, these are wines to check out, their Russian River Valley Pinot is as you’d want and expect from the region with loads of deep fruit, it was sourced from two vineyards from the Dutton Ranch in the western part of the Russian River Valley. The cool vineyard sites retain Pinot’s beautiful natural brightness (acid) while the sandy Goldridge soils make the vines stress and go deep for water, concentrating and intensifying the beautiful almost candied cherry and red fruit flavors. This is an all American Pinot Noir showing lots of up front fruit, smoky sweet French oak and a curvy body, but there’s more to meet the eye here and the complexity fights through the cola and black raspberry adding layers of dried Provencal herbs, rose petals and a surprising lift of acidity that keeps things in check with hints of anise and Asian spices. Getting back to the Amalthea Rosé, it reminds me somewhat of the lees aged Provence wines and it flows with a distinct set of flavors that includes a juicy cantaloupe or muskmelon, some strawberry, light kirsch and creamy orange/tangerine citrus with hints of vanilla, yeasty notes and a touch of guava. Dry and crisp at first this Amalthea Rosé gains some weight and density with air, making it great with more robust food choices and an array of cuisines, it is surprisingly quaffable and refreshing, showing some talent and thoughtfulness and making for a singularly California expression. Both this extraordinary pink wine, and the Aristaeus Pinot Noir, stand out in Satyre’s set of current releases, and they are welcome additions to the new generation of Sonoma boutique wineries.
($28 Est.) 92 Points, grapelive