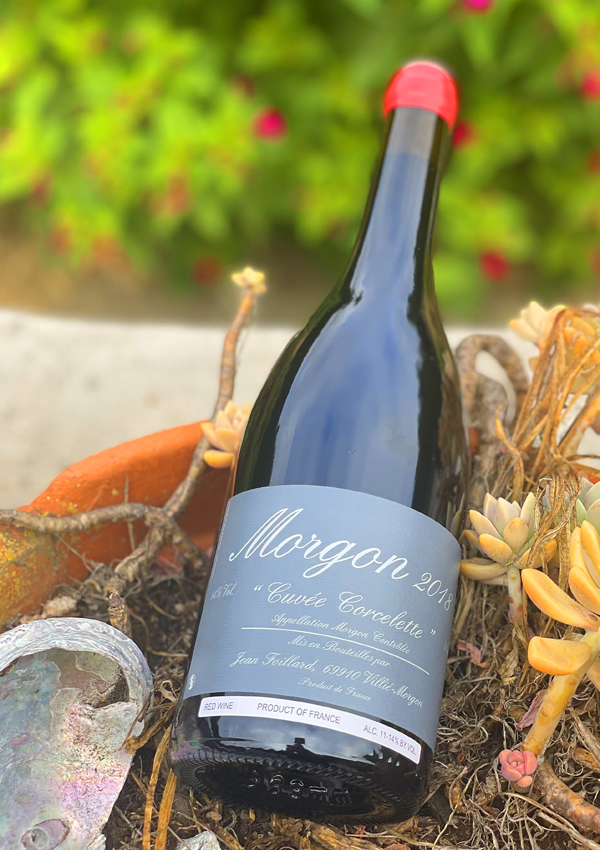 2018 Domaine Jean Foillard, Morgon “Cuvée Corcelette” Cru Beaujolais, France.
As I’ve stated many, many times here in my reviews of Cru Beaujolais, Foillard’s Morgon(s) are masterpieces and drink on par with some much more expensive Burgundy greats, as this vintage of his Cuvée Corcelette does with delicacy, elegance and subtle richness. This wine takes the once unheralded and less loved Gamay grape to new heights of pleasure and pays a great tribute to the legendary Jules Chauvet, who sought to bring traditional natural wine growing and winemaking back to this region. The nose has a mix of floral and earthy aromas, along with baking spices, walnut shells and dark berry fruits while much of the same flows on to the medium bodied palate with silky grace along with fresh plums, black cherry, strawberry, sweet red peach, mineral notes, sandalwood and sticky lavender. There’s plenty of natural acidity and inner energy here, as well as an undercurrent of violets and blood orange zestiness, though as it opens, this dark garnet hued Gamay takes on a more Pinot like grace and roundness with a long lingering finish. Jean Foillard makes some of the most sublime wines in France, not just here in the Beaujolais region and this Corcelette is one of my absolute favorites along with his regular Morgon Cote du Py, the Cuvée 3.14 and the rare Fleurie. I try to get my hands on this bottling every year and to be honest it is much more for just personal use than to write about it, but certainly I have over the years starting around the 2004 vintage and I now look forward to exploring Jean’s son Alex’s own efforts, like those from follow new generation winemakers Charly Thevenet, Mathieu Lapierre and Justin Dutraive, to name a few which have shown real promise in their efforts that I’ve tried so far.

Jean Foillard took over his family’s domaine in 1980 and quickly gained a reputation for making exotically beautiful Gamay, mostly from old vines higher up in the Morgon zone and especially in the Cote du Py with vines that are around 90 years old and have Schist, the classic Granite and Manganese, all of which make for a special terroir. Jean began, early on in his career, to follow the teachings of Jules Chauvet, a traditionalist who, as famed importer Kermit Lynch says, defied everything that the more commercial brands were touting in the region at the time. Foillard along with three other local vignerons, Marcel Lapierre, Jean-Paul Thévenet, and Guy Breton, also joined in on this natural wine movement, long before the modern evolution of the term. This Gang of Four, as Kermit christened them, set about a return to the old practices of organic viticulture and vinification which called whole cluster and indigenous yeast fermentation, though starting with the use of small yielding old vines, never using synthetic herbicides or pesticides, harvesting late with the healthiest grapes and adding only minimal doses of sulfur dioxide or none at all. Such was the success of these guys, that now that seems pretty normal and even better these wines age majestically and are highly coveted by collectors. For his Cuvée Corcelette Foillard employs his traditional, whole cluster fermentation that usually lasts (on the skins) for close to three, sometimes four weeks before gentle pressing and racking to large cask where the Gamay is matured for between 6-9 months, depending on the vintage, in used oak barrels and one huge 30-hectoliter foudre. I have often compared Foillard’s Corcelette to Chambolle-Musigny, a village where the wines show a seductive prettiness and are aromatic, and this 2018 is much the same, I highly recommend all of Jean’s offerings, they never fail to impress. This wine was a great way to celebrate friends, food and Bastille Day!
($50 Est.) 94 Points, grapelive