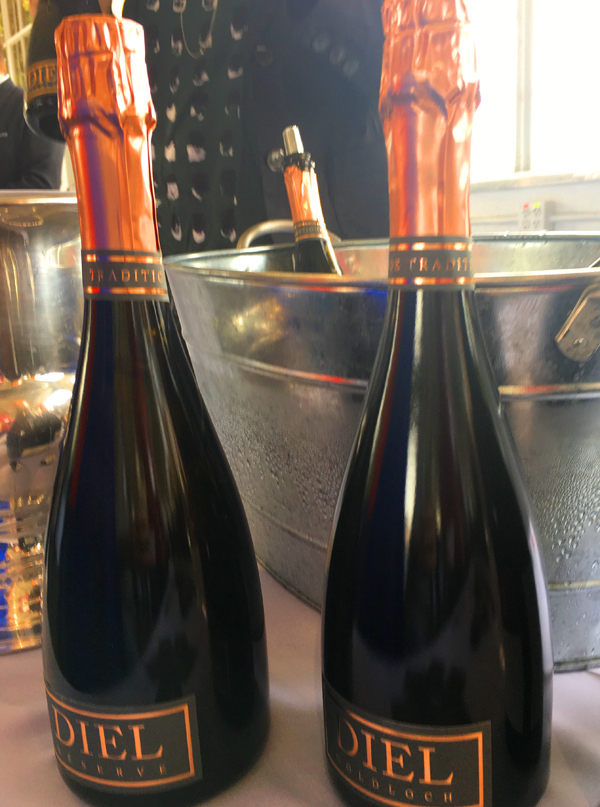 2012 Schlossgut Diel, Riesling Sekt “Reserve” Extra Brut Sparkling Wine, Nahe Germany.
As I have mentioned in prior reviews, Caroline Diel is one of the great winemakers of the world, of course her dry Schlossgut Diel Rieslings are her main claim to fame, but as noted here, her Pinot Noir and Sparkling wines are fantastic as well, with this Reserve Sekt Sparkling Riesling from her estate vines in the Nahe being an absolute stunner! These Diel bubbly offerings are crafted in the Champagne style and deliver incredible depth, on par with the likes of vintage Krug and or Vilmart, one of my favorites and I am always left with my mind blown after sampling these distinct and extended lees aged examples. Caroline’s set of grower producer sparkling wines include the single vineyard Goldloch, which I reviewed earlier and a couple of special cuvées, including this Reserve that is released slightly earlier and usually shows the most precise and crisp detailing with this 2012 vintage having loads of driving mineral tones, lots of vigorous acidity, zippy white stone fruits, racy citrus and a hint of a slate/smoky element. There also, as in all of these great, intensely dry, pale gold Extra Brut sparklers, a classic brioche, leesy/yeasty notes, dried apricots, lemon curd, golden fig, wet rock and a caressing energy from the small bubbles that bead beautifully in the glass, with this one being ultra impressive and lovely. I can’t wait to try the latest set of Diel’s grower fizz, which includes the version of this wine from the 2017 vintage and a all new Brut Rosé, that I haven’t tried yet!

The historic Schlossgut Diel, one of the first estates in Germany to promote a drier style Riesling around the world and makers of some of the greatest Grosses Gewachs from their vines in the lower Nahe. The winery, based in the Burg Layen castle near Dorsheim, was purchased by Diel family in 1802 after Napoleon’s troops were vanquished from the region, but it really gained attention under current owner Armin Diel and now with his daughter Caroline Diel making the wines, it never has been better. Caroline, who has even done a winemaking stint at the Domaine de la Romanee-Conti, is one of the Germany’s best vignerons and her Rieslings and her Pinot Noir are outstanding wines. A lot has deservingly been written about Schlossgut Diel’s wines and Caroline’s talent in the vineyards and in the cellar, but these sparkling wines should not be overlooked, in particular and as suggested above look for her Reserve bottling and the Goldloch single Cru. As for the winemaking, Caroline does a, as she notes, a gentle whole berry pressing of a special selection of Riesling grapes, that is followed by spontaneous “Sponti” indigenous yeast fermentation and with the mentioned extended lees aging in stainless steel tanks. This 2012 Reserve, which is still available from Diel’s importer Skurnik, was disgorged on 11/2018, after close to 62 months of tirage. The winery adds, that after filtration and tirage, a secondary fermentation begins inside the bottle, then the wine is then left on the lees again for a long period to gain its luxurious texture and complexity before release. Serious stuff here, I highly recommend searching high and low for these these Diel Sekts, as well as Diel’s full range of Dry and Off Dry Rieslings from Caroline’s Kabinett to her outstanding GGs.
($57 Est.) 95 Points, grapelive