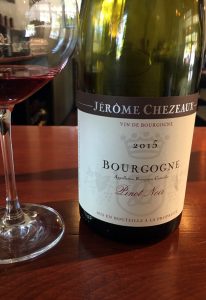 2015 Domaine Jerome Chezeaux, Bourgogne Rouge, France.
One Burgundy’s under the radar stars, Jérome Chézeaux follows historic guidelines using ultra traditional methods in the cellar, he’s a genuine and studied “non-interventionist” employing natural indigenous yeasts after a cold maceration his fermentations last 2 to 3 weeks with about a 30% new oak regime. What sets Chezeaux apart is the purity and delicacy in his wines from vines in and around Nuits-Saint-George mainly, though he also has holdings in Vougeot and Vosne-Romanee as well. The basic cuvee, the Bourgogne Rouge is from parcels near the estate in Prémeaux-Prissey just south of Nuits-Saint-Georges, as well as Nuits-Saint-Georges itself, only Cote de Nuits fruit is used and the wine reflects the local terroir of these sites and of the clay, sand, gravels and limestone soils. This wine usually is fresh in detail, bright and with a slightly restrained character along with having a earthy/savory edge, but with the 2015 vintage there seems to be a deeper sense of fruit to be found with classic Burgundy charm and elegance. This is a killer value, starting with a touch of reduction that quickly fades into bing cherry, plum and briar laced raspberry fruits with a hint of loamy earth, minty herb, orange rind and soft floral tones, adding a bit of body with air, it got even better the next day picking up a slightly dark character, this ruby/garnet Pinot is seriously classy for the price.
($30 Est.) 91 Points, grapelive