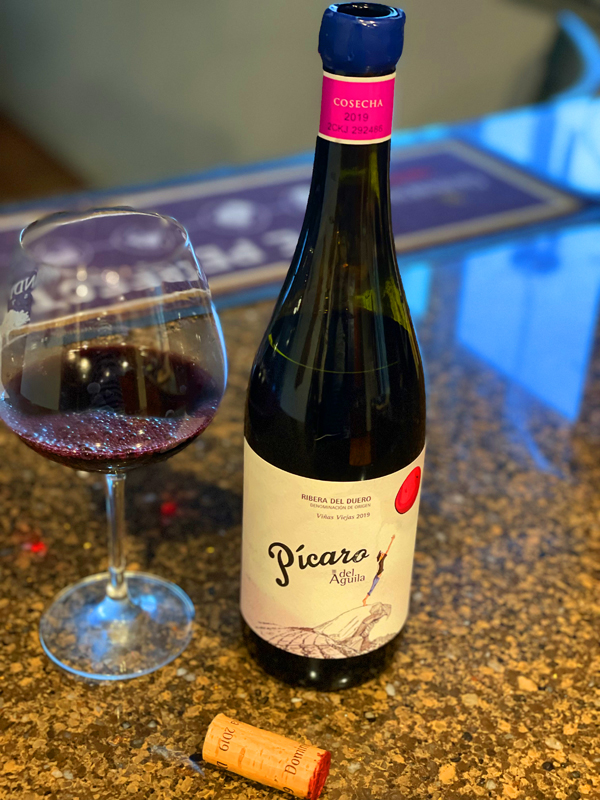 2019 Dominio del Aguila, Picaro del Aguila Tinto, Viñas Viejas, Ribera del Duero DO, Castilla y Leon, Spain.
I had not had Jorge Monzón Pascual and Isabel Rodero’s Dominio del Aguila before enjoying this delicious Picaro red blend, which is a shame as the quality and authentic flavors are seductive with its sultry earthiness and deep old vine fruit offering a very compelling experience. The 2019 saw mostly Tempranillo (close to 90%), but with other Spanish native varietals such as Albillo, a rare white grape, Garnacha and Bobal, another rarity not usually found in this part of the country, all from selected old vine parcels and all farmed organically. This 2019 is invitingly dark in color with a purple/garnet hue in the glass and shows a mix of earth, red berries and flowers on the nose before filling out on the raw and rustic, but supple palate with black cherry, lingonberry, plum, pomegranate and Mission fig fruits, along with an array of spices, tangy herbs, chalky stones, cedar and a touch of game. This is a bottle that benefits from air and especially food, which brings out a additional sense of depth and sweetness of the blue fruit core, taming the whole bunch crunch here and gives more texture and completeness to this impressive effort. Dominio del Aguila is a winery to watch and Jorge Monzón is an exciting and talented winemaker, who has an impressive resume having worked stints at Domaine La Romanée-Conti, where he interned and worked along side legend Bernard Noblet and at Vega Sicilia, one of Spain’s most prized wineries, and I highly recommend looking for these wines.

Dominio del Aguila’s winemaker Jorge Monzon Pascual explains that the Pícaro del Aguila Tinto is a co-fermented blend of Tempranillo, along with Albillo, Garnacha and Bobal, with the fruit especially picked from parcels chosen for their quality and in tune to vintage conditions of each year. He goes on the say that this blend changes in terms of grapes and locations, factoring what they get, like In warmer years, cooler sites are favored, and in cooler vintages, warmer sites are utilized. All these sites, farmed by hand, have soils of gravel and heavier clay, which in a dry continental climate like here in the Ribera del Duero prevents vine stress and promotes, as the winery notes, an even and simultaneous ripening of both the fruit and the stems, that is vitally important for 100% whole-cluster wines like this one and natural yeast fermentation(s). The Picaro was co-fermented in concrete tanks, with manual pigeage and a lengthy maceration period to extract all the color and flavors before being aged in French oak, mostly used and or neutral, with less than 15% new, for between 12 and 20 months, after which the final wine is bottled unfined. The Picaro, which has a touch of natural funk is not only organic and all natural, it is vegan as well and has ultra low sulfites. Jorge and his Isabel Rodero, founded Dominio del Águila in 2010 after buying up some old vine sites here and Isabel, an architect designed and oversaw the renovation of an ancient cellar that dates back to the 15th century. This cool cave allows for perfect conditions to make these exceptional wines, that benefit from their cold, subterranean cellar, ensuring that the evolution of their wine proceeds slowly.
($35 Est.) 93 Points, grapelive