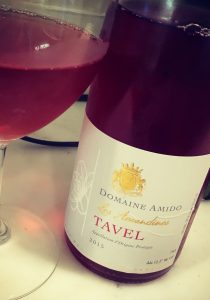 2015 Domaine Amido, Rosé Tavel “Les Amandines” Rhone Valley, France.
The 2015 Tavel from Domaine Amido is a deeply hued and flavor filled pink that delivers rich detail and refreshing vibrancy with some dense texture and tangy spiciness. The fruit is bright, but almost medium-bodied with lush watermelon, wild strawberry, distilled raspberry and red citrus with hints of pomegranate and rosewater as well as mineral tones and peppery lavender. This is expressive stuff from Amido and very true to the classic Tavel Rosé style with more concentration than the Provence wines, but what it lacks in delicacy it makes up for in hedonistic pleasure and flamboyance, this is superbly seductive and will get great with late summer and fall weather, warm nights and sunsets. Flexible with many cuisine options make this Grenache based pink a joy for grilling outdoors and a great pick for brunch. Domaine Amido, imported by San Francisco’s own Charles Neal, is a small family run estate, it is now in the hands of the late Christian Amido’s daughter Nathalie and grand-daughter Amandine, for which the Tavel is named, and her husband winemaker Antoine Berhaud, they have build a strong following for their Lirac and Cotes du Rhone which are lovely and value priced. The Tavel was made up of about 65% Grenache, 20% Cinsault, 10% Syrah and 5% Clairette, it was soaked for 36 hours, hence the color, fermented from the bleed off, slowly and with low temps to preserve fresh detail, it’s a tasty treat on a hot day. The soils are schist, clay and have galets much like Chateauneuf-du-Pape making for very expressive wines and intense fruit, be sure to look for Domaine Amido’s saignee Tavel Rosé.
($17 Est.) 90 Points, grapelive