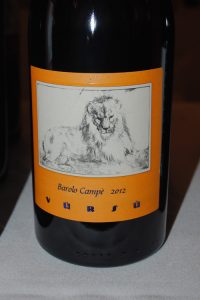 2012 La Spinetta, Barolo “Campe” Vursu, Piedmonte, Italy.
Remarkably refined and pure the Campe Barolo from Giorgio Rivetti and La Spinetta is an exceptional Nebbiolo that is showing beautifully with it’s more delicate youthful frame. The Campe is a modern Barolo, aged in new French oak for 24 months,then a further year in bottle before release, it’s an unfined and unfiltered beauty that hides it’s barrique oak incredibly well, feeling luxurious, but with clear varietal character from this 50+ year old vineyard that Rivetti started making Barolo from in 2000. More famous for his Barbaresco(s) and his fabulous Barbera(s), but his Barolo has become legendary, I got a chance to taste the first Campe from a cask sample and have been a fan ever since and Giogio tells me that that 2000 is still an exceptional Nebbiolo and that in a recent blind tasting with top Barolo producers it came out on top against some elite offerings! While 2012 is not a blockbuster vintage, I love these wines with their heightened flavors, softer tannins, lighter form and youthful juiciness (solid acidity), but don’t let that fool you these are serious wines too with potential to surprise in a few years and with good depth and complexity. The 2012 Campe, grown at about 800-900 feet up on classic calcareous soils with marl, shows a lovely ruby/garnet and brick/orange tinted hue in the glass with a mixed bouquet of dried roses, crushed violets, a hint of sweet smoke, forest berries and licorice leading to a medium bodied palate with black cherry, damson plum, cranberry, blood orange liqueur and lavender, minty amaro herbs, chalky stones and a hint of vanilla. Yes there is the new oak present, though you’ll not find it aggressive or intrusive, it frames this Barolo gracefully and the fruit is always highlighted and the primary focus and it will fade even more into the background with another 3 to 5 years and the mineral, earth and game will lift up, as they do with air in the glass. This 2012 Campe is one that can be really enjoyed young, it’s a sexy and more open knit thrill, while the monumental 2010 and the upcoming 2013 will need decades to be their best, this vintage has early drinking rewards, best from 2018 to 2026. I was impressed with the 2012’s drinkable nature and joins the 2004, 2007 and 2008 that are my personal favorite La Spinetta Campe vintages to date!
($155 Est.) 94+ Points, grapelive