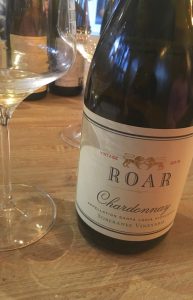 2015 Roar, Chardonnay, Soberanes Vineyard, Santa Lucia Highlands.
Gary Franscioni’s Roar label has been quietly flying under the radar in recent years, with wonderful wines being crafted by the talented Scott Shapley, their winemaker, because the wines have been so good they sell out almost immediately to their mailing or the lucky restaurant or wine merchant without much fanfare. So it was great to catch up with a new release from Roar, as a fan of Shapely’s efforts past and an early admirer of Roar, in fact the first vintage 2001, and I was not let down at all with this 2015 Soberness Chardonnay, it’s a full bodied concentrated white with vivid detail and lavish textures. Soberanes Vineyard is an awesome young vineyard in the Santa Lucia Highlands run by Mark Pisoni and crew, the Chardonnay block is planted to Old Wente clone, while the Syrah block is Alban clone and the Pinot Noir is the original Pisoni clone grown above the lower bench on a vein of quartz and granite soils with a dusting of gravel and loam not far from Garys’ Vineyard. The 2015 vintage was intense and with a smaller than normal crop adding to the richness of this Soberanes Chardonnay with honeysuckle, honeyed pear, kiwi and smoky vanilla leading the way with expressive force before filling out on the palate with apple, lemon curd, hazelnut, wet stones, sweet fennel and layered creaminess without being cloying or flabby much in the same way as Corton-Charlemagne, Pahlmeyer or Luc Morlet wines do so well. This is without a doubt a flamboyant and impressive wine, but it still charms with a burst of orange zest and vibrant pineapple that allows the refined acidity to shine through, best with soft/stinky cheeses, fatty fish, buttered lobster and or creamy pasta with prawns with it’s regal nature, drink from 2018 to 2026.
($48 Est.) 93-94 Points, grapelive