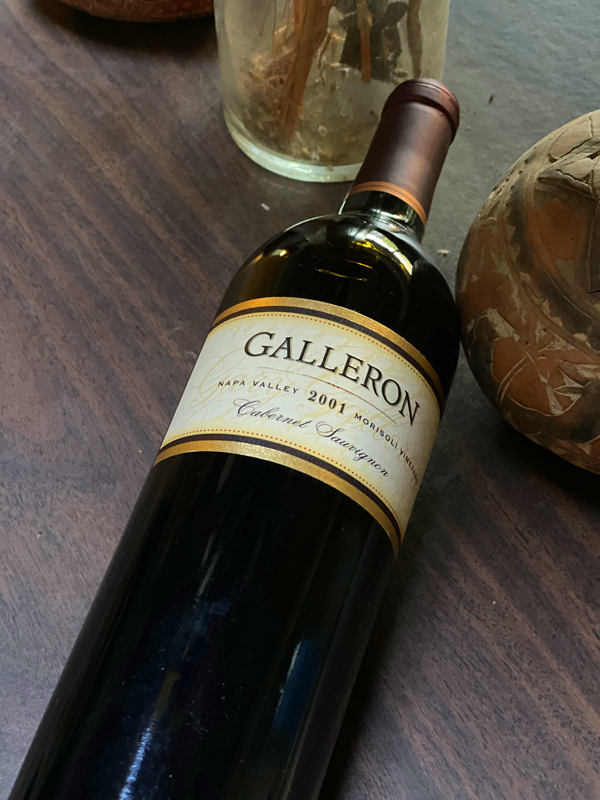 2001 Galleron, Cabernet Sauvignon, Morisoli Vineyard, Rutherford, Napa Valley.
Gary Galleron, who was the winemaker at Whitehall Lane during the early to mid 1990s, was a third generation Napa Valley native and made some incredible Cabernets into the early 2000s, especially those that were made from these Morisoli grapes, as witnessed here, in this classic and beautifully drinking 2001 version I was able to find through a private cellar. This 2001 is still fresh and structured with absolutely pure Cabernet fruit and a near perfect color, deep inky purple/garnet with just a faint burgundy/red brick edge and a lovely floral bouquet. The full bodied and smooth palate leads with blackberry, blueberry, currant and plum fruits along with cedar, anise, dried acacia flowers, loam, pipe tobacco and incense. I couldn’t have been more happy with the performance of this bottle, which was in perfect condition when I received it through K & L Wine Merchants, even after 20 years (cellaring) in private hands, it was well worth taking the chance on it and I am a huge fan of this vineyard site. Gary Galleron, who I first met when he started promoting his own label stuff in around 1999, was already known to me and I had been drinking his efforts from this Morisoli Vineyard dating back into the early 1990s, which included his masterpieces from Whitehall Lane from the 1990, 1991, 1992 and 1994 artist label versions, that still today remain some of the favorites, and even though the 1993 vintage wasn’t as much loved by critics, it was also a fabulous wine to drink at an early stage and was fairly priced for the pedigree and quality at the time. Galleron was quite the eccentric, as I remember, wearing skinny jeans and cowboy boots way before it was thing and was a non interventionist winemaker before it was a thing too, he employed very basic techniques and swore by long elevage, with this wine seeing close to three years in Bordeaux style barrels, if I remember correctly.

Gary Galleron, who began winemaking while in high school, went on to get his degree at Cal State Fresno, before embarking on his Napa winemaking career, which saw him overseeing some impressive cellars, including Vineyard 29, Grace Family, the mentioned Whitehall Lane, Chateau Montelena, Hartwell, Del Dotto and Seavey. That is an impressive CV (resume), but somehow his own wines have never gained cult status and are under the radar, which I find remarkable, but it has allowed me to find some awesome bottles over the years, especially as I repeat often, these Morisoli Cabernets. The Morisoli Vineyard, which lies in the heart of the Rutherford Appellation, an area noted for some of the world’s most coveted Cabernet Sauvignon was farmed by fourth generation grower, Gary Morisoli when this wine was made. The vineyard contains, what Galleron calls the elusive component of “Rutherford dust” that defines the distinctive Cabernets from this part of the Valley, which is on bench of gravelly soils, with old Cab vines, as well as Zinfandel, which today also produces excellent wines. Today it is Mike Morisoli who farms this vineyard, that is located on the west side of Highway 29 and just south of Niebaum Lane, near the famous Inglenook (Rubicon) estate, in the heart of the famed “Rutherford Bench”. This wine, which was sold for as much as $100 a bottle, saw 30 months in French oak with percentage of new oak that has refined the tannin and added some nice vanilla and sandalwood notes that are full integrated into the 2001 Cabernet. Over the years Morisoli has been in some outstanding wines, with the Karl Lawrence, now Trujillo Wines, also having some Morisoli grapes. Galleron’s grandparents, which were French immigrants, Angele & Virgile Galleron, settled in the Napa Valley in 1918 and began a historic winegrowing legacy that continued through Gary, in fact they even have a road named after them for their efforts. Gary said he started up the winemaking ladder at Chateau Montelena under the guidance of the legendary Mike Grgich, who was influential in the style of wines Galleron made, like this beauty.
($89 Est.) 94 Points, grapelive